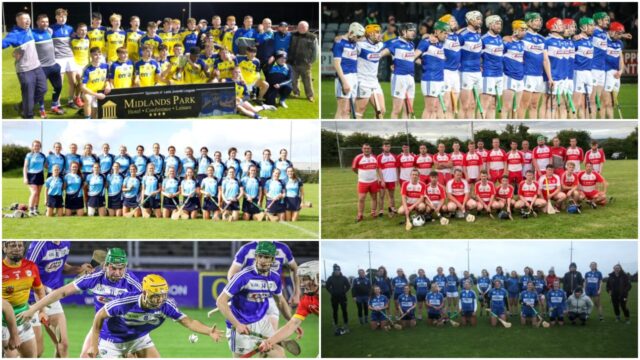 Here at LaoisToday we do our best to cover as many GAA matches as possible.

And now we’ve compiled a list of the ten hurling and camogie games of the year.

With Covid-19 wiping out a lot of GAA action this year, our choices were slightly curtailed but there were still plenty of brilliant matches to choose from.

Check out our selections below:

This game tops the bill as it was one of the greatest upsets in the senior hurling championship in recent memory.

Rosenallis, only promoted to senior that year, were up against the side who were campions in 2017 and 2018.

The winners of the game would qualify for the semi finals while the losers would be out, so the stakes were high – but underdogs Rosenallis led from start to finish.

They opened up a nine point lead by the time of the first water break as their pace and movement caused Camross all sorts of problems all over the field.

Paddy Keating led the way in the scoring stakes and finished with 1-8 but they 10 different scorers in all, from all sectors of the field.

Camross tried to rally but Rosenallis were not for catching as they knocked one of the pre-tournament favourites out.

Quickly following one giant-killing is a game which should have seen a similar outcome.

In what would become Eddie Brennan’s final game in charge of Laois, the pushed Clare all the way in Kilkenny.

Laois played with an extra man throughout the second half following David McInerney’s dismissal and they embarked on a desperate comeback that just fell short.

In the end, a point was all that separated the sides following a much improved Laois performance that will give them great hope for the 2021 campaign.

Laois can feel unfortunate as a couple of decisions went against them – including what looked to be a penalty for a foul on Paddy Purcell – but it just wasn’t to be.

Laura Marie Maher was the star of the show as O’Moore’s came from behind to claim third third Laois Camogie championship title.

The Rosenallis woman, who had endured a dreadful time in recent years with knee injuries, was simply unplayable in MW Hire O’Moore Park, scoring ten points, as her side turned a four point half time deficit into a five point win.

It was heartbreak for St Brigid’s for the second year running in the final after defeat to Camross last year and their wait for success at this level for the first time since 2004 goes on.

Abbeyleix were crowned minor ‘A’ hurling champions following a dramatic extra time win over The Harps in the LOETB Centre of Excellence in October.

A game that was largely low scoring, caught fire towards the end of the second half and Abbeyleix continued at that pace into extra time to win by six in the end.

It was harsh on The Harps who, competing in their third straight decider, battled really well for the majority of the game and probably thought they had it won as they led by a point heading towards full time.

But Shaun Fitzpatrick sent the game to extra time with a score from 60 yards and once there, Abbeyleix kicked on.

Liam Kavanagh ended the game with five glorious points from play while the industrious Sam Quinn scored a crucial goal.

Nobody was knocked out following the end of this game, but the way it concluded was a mirror for how these two teams would fare in the rest of the season.

Borris-Kilcotton secured the opening victory of the 2020 Laois SHC, as a fortuitous late goal from Emmet Jones saw them edge past Camross in an entertaining encounter at O’Moore Park.

The 2016 champions were underdogs coming into this one, particularly with PJ Scully out of action, but they did just enough to claim the win.

They were ahead for most of the first half, and even though they fell behind on a few occasions in the second, they battled back every time and were in the perfect position to take advantage of some good fortune when it came their way.

A late free from Picky Maher ensured a share of the spoils in this pulsating Laois SHC Round 1 game in O’Moore Park, as Clough-Ballacolla and Rathdowney-Errill ended all square.

In a game that had the real cut and thrust of a championship encounter, despite the long layoff for both teams, a draw was just about a fair result.

Clough-Ballacolla probably felt harder done by though, having been in front for most of the game.

However a few missed chances late in the game left them needing Maher’s free with the last puck of the game to get the draw.

Castletown picked the right time to find some form as they edged out Ballinakill in the Laois SHC relegation playoff in the LOETB Centre of Excellence.

Having lost their three group games by nine, thirty and twenty-seven points respectively, the one-time powerhouses of Laois hurling looked doomed for a stint in the intermediate ranks.

However, having installed Paddy Mullaney as their manager they managed to dig their heels in and found some form to retain their status.

For Ballinakill, who drew with Rosenallis in Round 1, it resulted in a return to the second tier of Laois club hurling for the first time since 2014, when they won the SHC ‘A’ title.

The Laois Camogie team reached the All-Ireland semi final this year – but they did so following a dramatic encounter with Kerry.

Laois only managed one score in the first 45 minutes of the game but they turned the game around as wing back Clodagh Tynan scored two outrageous points to force extra time.

And after that, forward Kirsten Keenan took over as she fired four points in the two additional periods to see Laois through where they went on to lose out to Antrim.

This game makes our list not because it was a classic, but for the sheer novelty of it.

Very few people would ever have thought you’d have needed a ticket to attend a game in Ballypickas but that was the case in July as they hosted Trumera in the first competitive GAA game in Laois in almost five months.

A limit of 200 on crowds at outdoor gatherings in this Coronavirus world meant that it was, indeed, a ticket-only affair. Your name and phone number was taken at the gate, hand sanitizer was dispensed and the players arrived togged out with the dressing rooms out of commission.

Other than that it was the same as ever really as two of Laois’s smallest clubs did battle in the opening round of the Laois intermediate hurling championship – with Trumera winning on their way to the final which has yet to be played.

Laois had not won a game at this grade for a long time – and had lost to the likes of Carlow and Westmeath more than once.

But Enda Lyons’ charges managed to defeat Carlow as a Mark Hennessy goal proved the difference on a bitterly cold October night.

While they would be well beaten by Galway in the quarter final, this was a good win nonetheless.