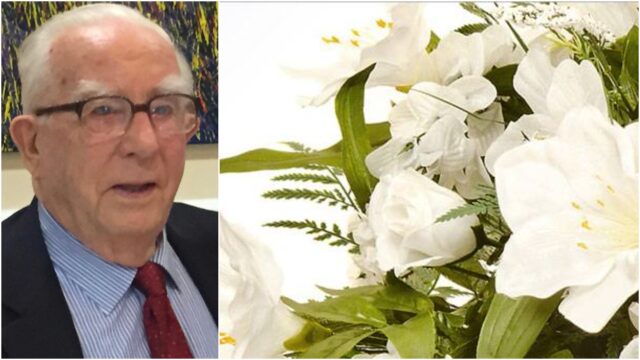 The death has taken place of Liam Carroll, a highly-regarded member of the Courtwood and Rath communities.

He passed away suddenly in his 92nd year at his home in Courtwood on Tuesday evening.

He is survived by his wife Theresa and children Alice, Bill, John Bosco, Pat, David, Oonagh and Philip, his 16 grandchildren, daughters in law, son in law, brothers in law, sisters in law, nieces, nephews, relatives, neighbours and a large circle of friends.

Originally from Clonanny near Portarlington, Liam was one of the founding members of O’Dempsey’s GAA club in 1951 and the club’s first chairman before moving to live and farm in Courtwood.

It was on his land that the Courtwood footballers used as their home pitch – known as ‘The Lawn’ – for many years prior to their move to their current grounds in the 1990s.

He had been president of Courtwood GAA for a long number of years.

Liam was a very active member of the Irish Farmers Association and as well as being chairman of Vicarstown IFA for over 25 years, he also served as Laois IFA grain chairman which meant that he was a member of the national IFA grain committee for a number of years.

As well as that he was involved with the National Farmers Association and the Beet and Vegetable Growers Association prior to the actual foundation of the IFA. A number of years back he was made an honorary life member of Laois IFA.

Due to the Covid 19 restrictions, a private family funeral will take place.

Removal from his residence on Friday morning at 11.20am to arrive at the Sacred Heart Church, Rath, for 12 noon Requiem Mass. Interment to follow in the new cemetery Emo. Liam’s Requiem Mass will be live streamed (link to follow).

Sympathisers are welcome to stand along the route to the church and in the precincts of the cemetery grounds. Social distancing to be observed at all times, please.

The Carroll family would like to thank you for your co-operation, understanding and support during this sensitive and difficult time.