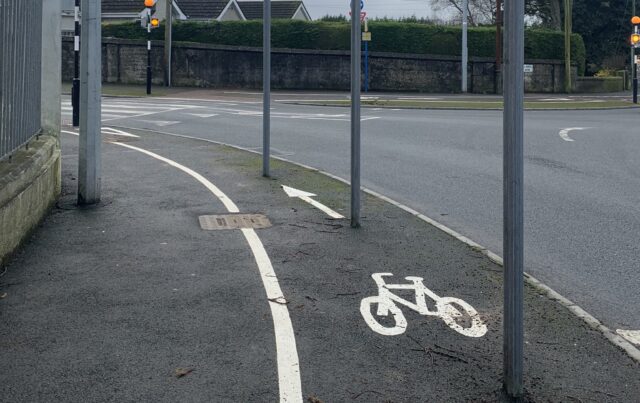 The picture, in all honesty, speaks for itself here.

Laois woman Louise Troy captured an image of a cycle lane in Portlaoise – and it went viral on Twitter simply because it really is unclear how anyone would cycle safely on it.

The barrister, who comes from The Heath, described the path as more of an obstacle course than a cycle lane – and she’s not wrong as a number of poles are erected right in the middle of it.

The cycle lane in question is located on the Block Road in Portlaoise – just before you start to turn left if you are heading for Portlaoise Hospital.

Louise, who recently joined the Laois-Offaly branch of the Social Democrats, described the path as very dangerous.

She said: “This is what my local council calls a cycling path.

“Might be better to rename it an obstacle course.

Fine Gael Councillor Thomasina Connell, on spotting Ms Troy’s picture, says she intends to raise this at this week’s meeting of the Portlaoise Municiple District.

She said: “Which came first the chicken or the egg? The cycle path or the 14 poles in this photo?

“I will raise this with Laois County Council at the next Portlaoise Monthly District Meeting which takes place on Wednesday.”

SEE ALSO – Thanks to musicians, sports clubs, customers and staff as Laois pub closes its doors