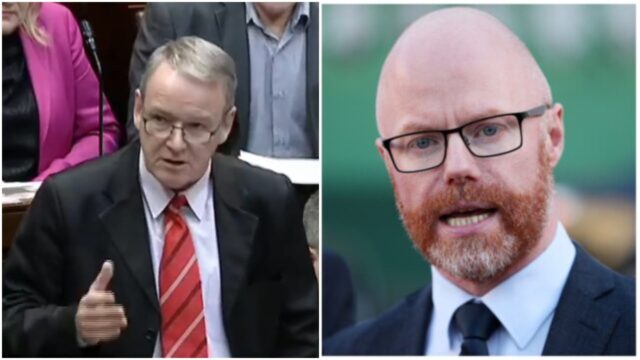 The Laois TD says his party will bring forward a motion on Wednesday, calling on the government to pay student nurses immediately.

And he is calling on his fellow Laois/Offaly TDs, Charlie Flanagan, Sean Fleming, Barry Cowan and Carol Nolan, to back the motion.

Deputy Stanley said: “Sinn Féin is bringing forward a motion in the Dáil on Wednesday to make the Government pay student nurses and midwives now.

“I am calling on all TDs from across all parties in Laois/Offaly to do the right thing and back this motion.

“The Minister for Health has suggested paying student nurses and midwives just €100 per week. This won’t cut it.

“There should be no more empty promises or delays. This is a crisis.

“The review the Minister based this small sum on was conducted before the current crisis and recognised that, if the situation changed, that it would be appropriate to return to the March pay agreement.

“Where students are needed to fill employment gaps they should be paid appropriately.

“There was a severe staffing crisis before the pandemic, and now it is even worse.

“Throughout the pandemic, student nurses and midwives have been working bravely and tirelessly every day to protect our families and communities from Covid-19.

“The way the Government has treated them has been nothing short of insulting. It’s time to do the right thing and ensure they are paid properly. They deserve respect and must be protected from exploitation.

“Sinn Féin’s motion this week will ensure the March pay agreement returns. This is more important than ever, as the public health crisis worsens.

“The Government cannot keep trying to hide from this issue. Sinn Féin will stand up for student nurses and midwives to ensure they are treated fairly.

“The decision to pay student nurses and midwives lies with the Minister for Health but Minister Harris is also responsible for protecting students from exploitation.

“The time to deliver is now.”