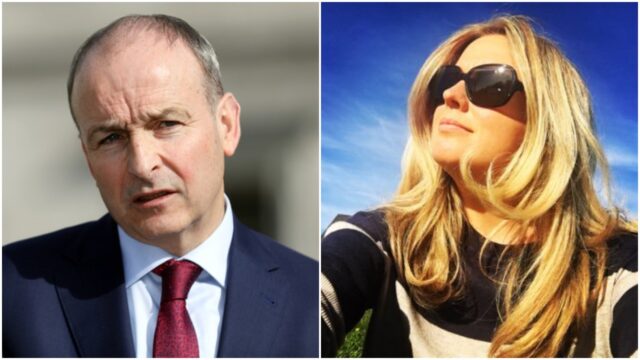 The daughter of a Mother and Baby Home survivor has penned an open letter to Taoiseach Micheal Martin – calling on him to retract the part of the state’s apology where he said that what happened was a result of how “society” had acted at the time.

Laura Murphy, a marketing executive, is the daughter of Mary and they are both from Portlaoise.

Mary, who is now 63, fell pregnant at 17 and her family were told by the parish priest that she had to leave home before she “contaminates the morals of other girls”.

Laura says that the family’s GP also told Rose’s parents that the teenager would ‘bring shame on her entire family if anybody was to find out she was going to give birth outside marriage’ – and so she was sent to St Patrick’s on Navan Rd, Dublin.

In his apology after the publication of the Mother and Baby Homes Commission Report in early January, Taoiseach Martin said the appalling treatment of women and children was the direct result of how society had acted.

He said: “We, both State and society, had embraced a perverse religious morality and control, judgmentalism and moral certainty, but shunned our daughters.

“We honoured piety, but failed to show even basic kindness to those who needed it most.

“We had a completely warped attitude to sexuality and intimacy, and young mothers and their sons and daughters were forced to pay a terrible price for that dysfunction.”

But Ms Murphy says this is wrong and is calling for the Taoiseach to retract this element of the apology and to fully commit to a future of transparency, healing and justice.

She said: “The parish priest forced my mother from her home townland upon hearing she was pregnant. He instructed my grandparents to ‘get her out of the parish before she contaminates other girls’.

“Within 24 hours she was gone. It broke my grandparents’ hearts and so began a long journey of pain and trauma for the entire family. This is the story of so many others. A story that is not being properly heard or honoured.

“The impulse behind my letter is that like the majority of Irish people, I do not agree with the part of the State apology that lays the blame of this regime on ‘society’.

“It was not society’s fault, it was a cruel religious regime that the state enabled and supported. A regime that enforced power and compliance affecting the entire nation, including my mother. This led to pain, suffering, trauma and devastation, still felt today.

“This truth needs to be understood, acknowledged and acted upon. Survivors need real respect, redress and support, not just lip service.

“As part of this I am calling for a new national holiday to mark Brigid’s Day. It is time to honour Ireland’s women, past, present. and future.”

You can read Laura’s letter in full below:

I am the daughter of a Mother and Baby home survivor and I wish to share this open letter on behalf of Mná na hÉireann concerning the recent State apology, and in particular the following alarming element:

“This treatment of women and children is something which was the direct result of how the State, and how we as a society acted. We embraced a perverse religious morality and control, judgementalism and moral certainty, but shunned our daughters.

“We honoured piety, but failed to show even basic kindness to those who needed it most.

“We had a completely warped attitude to sexuality and intimacy, and young mothers and their sons and daughters were forced to pay a terrible price for that dysfunction.”

These are the words that turned what should have been a watershed moment of healing into a whitewashing of trauma. An expounding of truth became a distortion of history. An unequivocal assumption of responsibility descended into a dispersal of blame.

The society you speak of was the remnants of one invasion after another from the beginning of our history, the vestiges of a perpetual battle for the reclamation of sovereignty and the preservation of the spirit of our people and land. It was a miracle that we – a small, pillaged, broken nation – had any remaining energy or means to fight for and win our freedom. But we did.

The key word here is ‘we’. There was no need for gender quotas in the fight for Irish freedom. Mná na hÉireann showed up in their droves. They were outstanding. Constance Markievicz, Maud Gonne, Hanna Sheehy-Skeffington, Grace Gifford, Ella Young to name but a few. Women’s organisations such as Inghinidhe na hÉireann and Cumann na mBan played a pivotal part in the military, political, cultural and humanitarian aspects of our fight for independence and the subsequent birth of the state.

When Pádraic Pearse declared Irish independence, he addressed ‘Irishmen and Irishwomen’. The promise of our proclamation was ‘equality, happiness and prosperity for all men, women and children’.

Yet, when we emerged from the ashes of the Civil War, the collective trauma had hit new lows. We were a war-weary, exhausted, divided and vulnerable society. Ripe for the deception and manipulation that was about to transpire. Despite resistance from the few who were in a position to see what was going on, Church and State were merged.

‘A terrible beauty was born’.

When it came to drawing up the constitution, it was authored in no small part by Archbishop John Charles McQuaid, a close ally of Taoiseach Éamon de Valera. Article 41.2 made sure that the place for women in society was in the home and nowhere else.

Women and children were written out and the Roman Catholic Church was written in.

Under the constitution, women had little access to the sovereignty they fought for, no autonomy over their own bodies. Marital rape was not a crime, contraception was. Women were prevented from working after marriage, banned from divorce, access to information was censored and there was little support from the State.

De Valera and his contemporaries rode on the coat-tails of women to win Irish independence and when he assumed power, women were largely excluded from political, economic and societal life.

Mná na hÉireann fought for democracy, they got a theocracy. They fought for equality and got oppression. Religion replaced empire. One form of control, replaced by another.

Our ‘representative’ government was not organised to be malleable to the general will of society because it was dominated by the holders of unaccountable religious and moral power in the form of the male-led Catholic Church.

Safe Ireland defines coercive control as “persistent and deliberate pattern of behaviour by an abuser over a prolonged period of time designed to achieve obedience and create fear.

It may include coercion… isolation, degradation and control. It is all about making a woman’s world smaller – trapping her, restricting her independence and freedom.”

The State sanctioned a regime of coercive control in which it and the men of Ireland were given unchecked authority and dominion over women and children, the devastating inter-generational effects of which are still being felt today across both genders.

This was not the society that Mná na hÉireann fought for. They were not privy to the finer details of what Church and State collusion meant. They were not present at the clandestine meetings, the corrupt conclaves or the dens of inequality that shaped our society.

Mná na hÉireann did not give informed consent.

The likes of W.B. Yeats and George William Russell gave warnings but with limited access to education, censorship, state-controlled media and Church-State propaganda, the Irish people were easily manipulated, deceived and controlled.

Muintir na hÉireann did not give informed consent.

Church and State colluded to write the constitution, the contract by which every citizen in society is bound. Therefore responsibility for the ‘perversion of society’ lies with the Church and State regime, and not the Irish people.

The Church held the power. Society suffered the consequences.

We, as a society, were coercively controlled by Church and State to behave in ways that were contrary to our nature.

Muintir na hÉireann, the people of Ireland, did not give informed consent.

Since then, many have tried to fight against what was the Church’s all too unchristian grip on society. Noel Browne, former Minister for Health, fought to bring in the Mother and Child Scheme in 1950, which proposed free healthcare to all women and children. It was opposed by the Church because it could have paved the way for birth control and abortion. It was then dutifully opposed by the Government.

Muintir na hÉireann did not give informed consent.

When Taoiseach John A. Costello sent a telegram to the Pope expressing his wish to ‘repose at the feet of your Holiness’, affirming his commitment to ‘social order in Ireland based on Christian principles’, cabinet secretary Maurice Moynihan responded by asserting ‘No civil power should declare that it reposed at the feet of the Pope’. The response was to exclude him from further cabinet meetings.

This ‘perverse religious morality’ of the Church meant that the men who impregnated women out of wedlock got off scot free, escaping all religious and social censure whilst the women were isolated, shunned and shamed – all in the name of Christ. It meant that even the women who were married were deemed unclean and unholy after giving birth because it resulted from sexual activity.

Mná na hÉireann did not give informed consent.

So, it falls upon us, Mná na hÉireann and citizens of Ireland in the 21st century to refute and reject claims that we, as a ‘society’ were responsible for the ‘perversion, religious morality, warped attitudes and dysfunction’ that caused this ‘dark period’ in our history.

We call upon you, as a representative of the State who colluded with the Church to perpetrate coercive control (now a crime) on the women and children of Ireland to wholly and unequivocally assume responsibility for the ‘perversion’ in ‘society’ that emerged as a result.

We call on you, as Taoiseach, as a human, father, husband, son and an upholder of equality to retract these sentences from the State apology and see to it that the Government addresses the glaring discrepancies and inadequacies of the report in a way that respects truth, brings justice and fully honours the survivors and their stories.

We call on the Government of Ireland to recognise Brigid, our matron saint, in the same way that St. Patrick is honoured. Originally an indigenous Goddess of Ireland, she was appropriated by the Catholic Church who made her a Saint.

In the spirit of unity, let Brigid’s Day, February 1st 2022 and all other years thereafter, be a national holiday where we honour Brigid as Goddess, Saint and symbol of feminine power and strength.

Let this gesture symbolise how our society values women and men equally. Ireland, Éire, a wounded land named after the Goddess Ériu. In our healing, we can rediscover our true selves and find that real sovereignty is possible when men and women can truly empower each other through shared strength and unity.

Let this be our commitment to shaping Ireland’s future, a new era guided by Brigid’s principles of light, inspiration, imagination, healing, truth, justice and love.

It is not too late to turn the whitewashing of trauma that the State apology amounted to into the watershed of healing that it was intended to be.