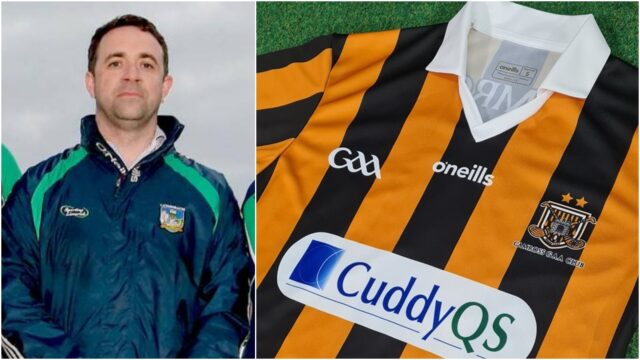 Camross will have a new manager in charge for the 2021 hurling season after the club appointed former player David Cuddy at a meeting on Thursday night.

Not to be confused with his namesake from Castletown, David is based in Limerick where he runs his own successful quantity surveying business and has been involved with Ahane in Limerick, Clonlara in Clare and was Limerick U-17 manager in 2017.

Cuddy was involved with Ahane in 2013-2014 where he worked with the likes of Limerick senior players Tom and Dan Morrissey while he was over Clonlara in the Clare senior championship in 2018-2019 where Clare seniors Colm Galvin and John Galvin were among the players.

His business, Cuddy QS, is the current Camross jersey sponsor.

He takes over from Tommy Delaney who was over Camross in 2020 alongside Fran Hogan and Damien Keenan who had guided the club’s second team to intermediate glory in 2019.

While Camross have three senior titles in the last eight years, they have had a considerable turnover of managers with Cuddy set to be the fifth different boss in as many years.

Arien Delaney guided the club to senior titles in 2013 and 2017 during his five-year reign while he was replaced by Offaly’s Danny Owens in 2018 when they put championships back to back.

Former player Brendan Lowry was in charge for the 2019 season when they lost to Rathdowney-Errill in the semi-final.

They experienced their earliest exit in a number of years in 2020 when losses to Borris-Kilcotton and Rosenallis saw them out after just two games and they only survived having to play in the relegation final by beating Ballinakill in their final group game.

There has also been a change on the club side of things with Arien Delaney stepping aside as chairman to be replaced by Jack Cuddy.

A former multiple club championship winner with the club, Cuddy was chairman when they last won the senior crown in 2018 and takes his place again at the top table alongside secretary Ursula Dunphy and treasurer Tadhg Doran.

Meanwhile, Rosenallis, Abbeyleix and Ballinakill are remaining with the same managers for the coming hurling season.

Lorcan Mahoney remains of Abbeyleix while Jimmy Walsh is again in charge of Ballinakill, who will be in Premier Intermediate competition in 2021.

Walsh will have Eimear Barry, Liam Dowling from the St Martin’s club in Kilkenny and player Eamonn Jackman alongside him.

Rosenallis have also confirmed that Offaly native Brian Troy will remain as their boss after he led them to the semi finals in 2020 – defeating Camross and Borris-Kilcotton in the process.