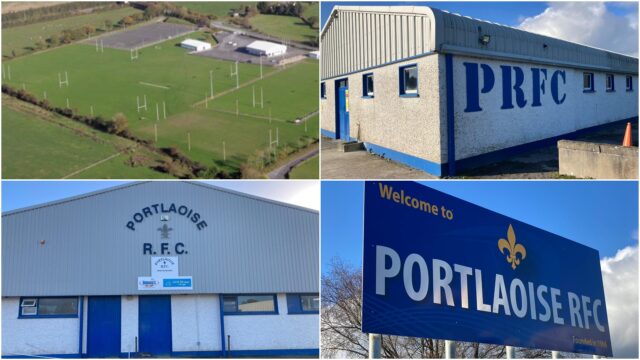 Portlaoise Rugby Club has unveiled a major plan which could see their grounds developed into a multi-purpose sports facility to also cater for the likes of basketball, hockey, tennis and athletics.

The club, which is based at Togher on an almost 20-acre site, have launched a consultation process which says their vision is to develop their grounds “into a top-class sports facility founded on sustainable and low-carbon principles”.

“As a rugby club we have prioritised rugby pitches in our proposals but there is scope to also accommodate other sports within our grounds,” they say in their virtual consultation document.

“Perhaps there are other sporting organisations in the midlands that do not have a secure or permanent place to call home and any future development of the Togher playing grounds may offer opportunities to form key partnerships and linkages”.

They have presented two plans, one that would see a development alongside their existing buildings that include clubhouse, bar and dressing rooms or the other that would see them replace the existing club buildings.

Among their proposals are for a multi-use indoor hall as well as a number of outdoor rugby pitches (including one with a 3G/4G playing surface), a stand, a walking track and outdoor facilities “to maximise the grounds for community use and to build partnerships with other local sporting organisations eg basketball, hockey, athletics, tennis etc”.

There is a history of other sports being played on the grounds previously with it once also being home to Portlaoise Hockey and Laois Cricket Clubs.

And as well as being located close to the motorway and the town, it is also beside the widely used Coillte-owned Togher Woods.

The Portlaoise Panthers Basketball Club are currently seeking to find a site and develop a long-term and are making a submission for the Laois County Council-owned land at Tyrell’s on the Stradbally Road. However, the site at Togher could also be a long-term solution.

Any development would more than likely require funding from the various sports governing bodies as well as government support.

A key part of the Portlaoise Rugby Club plan is their intention to ‘go green’ with a high proportion of the project dedicated to environmentally friendly initiatives.

Among the proposals are the development of hedgerows and trees to provide shelter for playing pitches, LED lighting, energy supply from solar panels, electric vehicle charging points, bicycle parking and pollinator friendly flowerbeds.

The ‘Green Infrastructure Consultation Plan’ for the rugby grounds in Togher, Portlaoise, is the result of extensive research completed for the club and it will guide the development of the local Laois community, the environment and the rugby club.

Portlaoise Rugby Club received grant aid from Laois Leader and subsequently engaged Green Pine Consulting in Laois in partnership with engineering company ‘RPS’ to complete the consultation plan with Brian Gaynor from Green Pine who was appointed project manager for the project.

“The club grounds will soon be on the edge of the urban area of the town with the development of the Togher area for industrial use and the new motorway service station,” adds the document under the ‘Scope of the Site’ heading.

“This brings with it opportunities to forge stronger links with the town in terms of access, proximity to new businesses and residents, connections to built infrastructure and new types of biodiversity habitat.

“New access links in the form of paths and greenways being developed as part of the Togher development offer the chance to make safer pedestrian and cycle links.

“This could include tying into the existing Slí ns Sláinte network of walking trails by creating a new route that serves the southern part of the town.”

In the consultation link, the public are essentially invited to give their views on the suggestions given for the Rugby Club.

Philip Bradley, President of Portlaoise Rugby Club, said he was delighted with the launch of this consultation plan as the potential was enormous.

Mr Bradley said: “The potential at Togher Rugby Club has always been huge, but never more so than now with so much development around Laois and in particular around Togher including the new Portlaoise Plaza and the development of factories in and around Togher.

“Our rugby club has grown from strength to strength and we pride ourselves in having one of the finest grounds in the country with five playing pitches.

“But there is much more potential at our club so PRFC Development Committee invited proposals from suitably qualified professionals to undertake a Green Infrastructure Development Plan for Togher Sports Ground Portlaoise.

“I sincerely thank Laois Leader for funding this project and also sincere thanks to our secretary Trevor Flanagan and club member Johnny Fingleton for bringing this project to this consultation stage.

“We now invite all members of the public to view the plan and to give as much feedback as they wish.”

The consultation document can be viewed in full by clicking here and all stakeholders, including members of the rugby club and extended community in Laois and extended environs are free to submit their views on this plan.