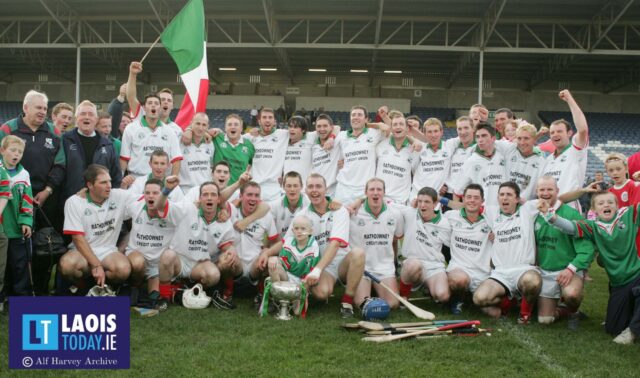 “Rathdowney-Errill are county champions. For the hurling folk and the general population of Rathdowney parish, it’s an opening sentence to a county final match report that they have not savoured in generations.”

And so began Brian Keyes’ match report in the Leinster Express edition of October 18 in 2006.

In early 2005, the Rathdowney and Errill clubs came together to form a new club, one that would provide hurling for the entire parish from underage all the way to senior.

This wasn’t “a temporary little arrangement” that once described a Fianna Fáil-PD coalition.

And it was almost an instant success, a marriage made in heaven. The new club won a Leinster League title in that first year and their second-string side won the intermediate grade.

Their first team reached the senior semi-final only to lose to Camross but that was a championship pock-marked by controversy as Rathdowney-Errill ended the season with a whopping €5,000 fine after falling foul of the County Board in a disagreement over that semi-final fixture.

In any case they came back stronger in 2006, coming through the group stages and then beating Mountrath and The Harps, after a replay, to reach their first senior final.

On the other side of the draw were Tinnahinch, a combination of Clonaslee and Rosenallis, albeit one that wasn’t as concrete an agreement as Rathdowney-Errill. 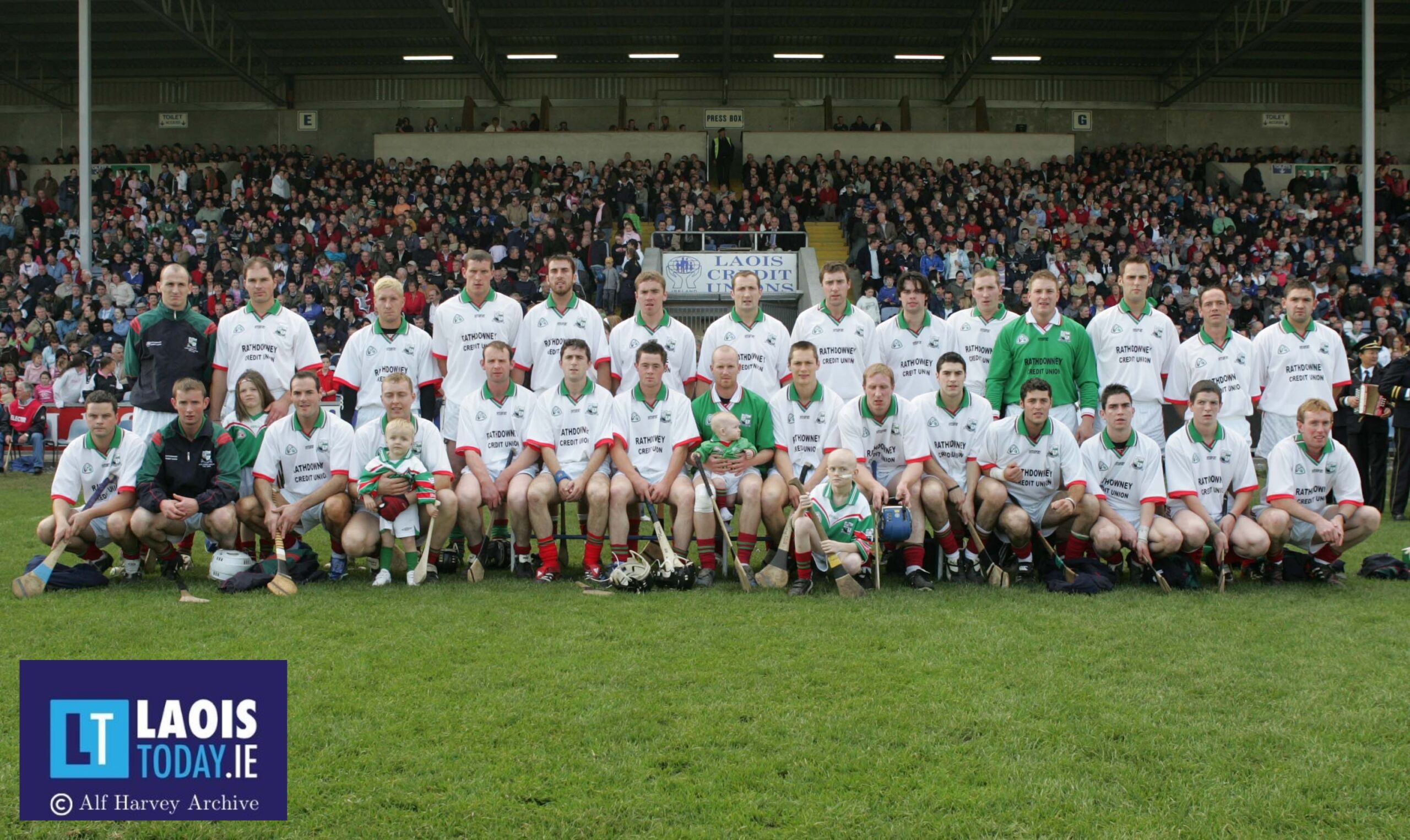 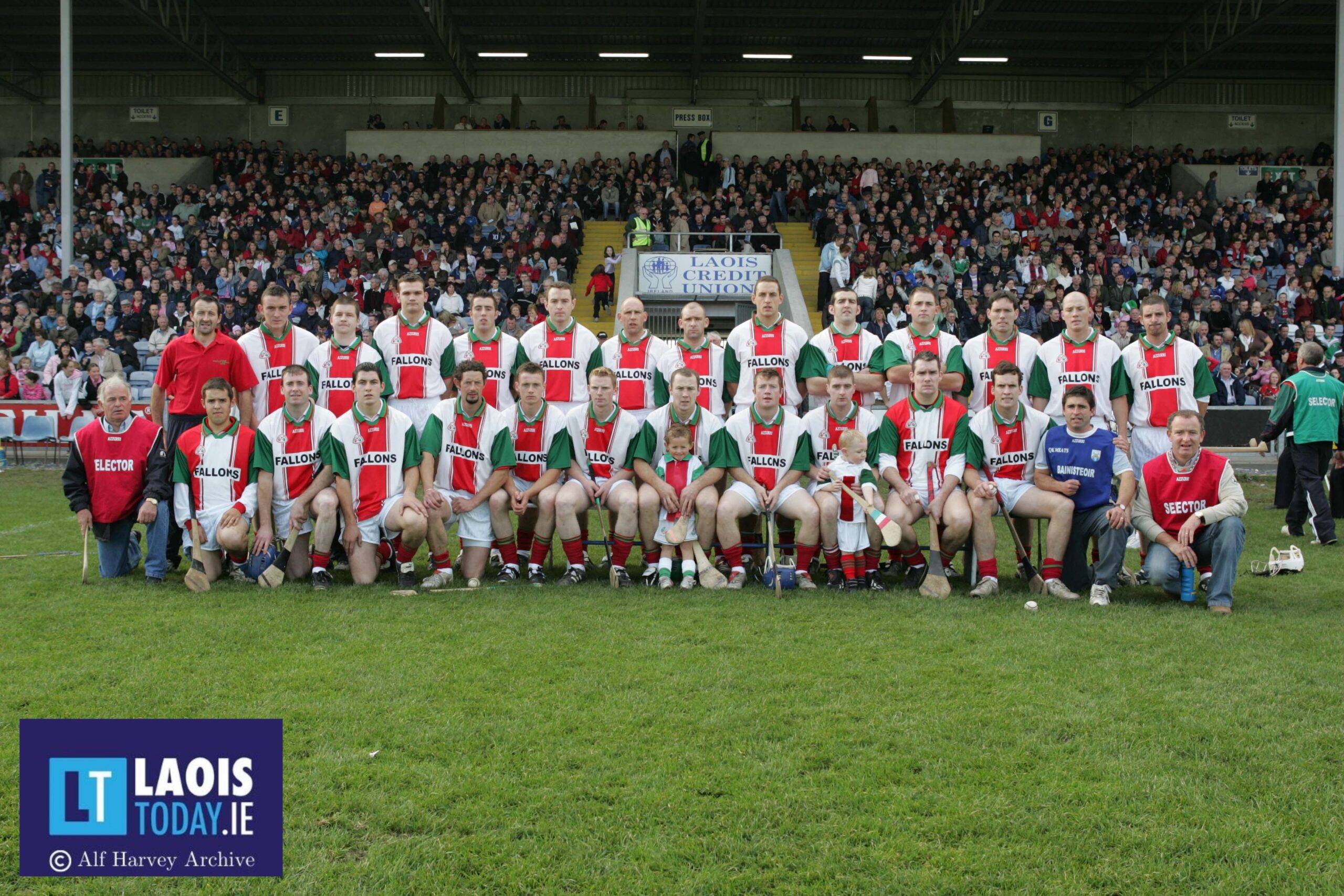 Clonaslee and Rosenallis continued to play separately in the junior or intermediate grades but at the time they were a fine senior team together and 2006 was their third final appearance, following losses to the great Castletown side of that era in 2001 and 2002.

They were beaten by Rathdowney-Errill by four points in the group stages but beat 2004 champions Portlaoise in the quarter-final and then got the better of Camross in the semi-final.

Camross had earlier beaten Castletown in the quarter-final, a game remembered for a serious brawl at the end of that game in O’Moore Park and a clash that would essentially be the last major flashpoint between the clubs after a decade of serious battles. 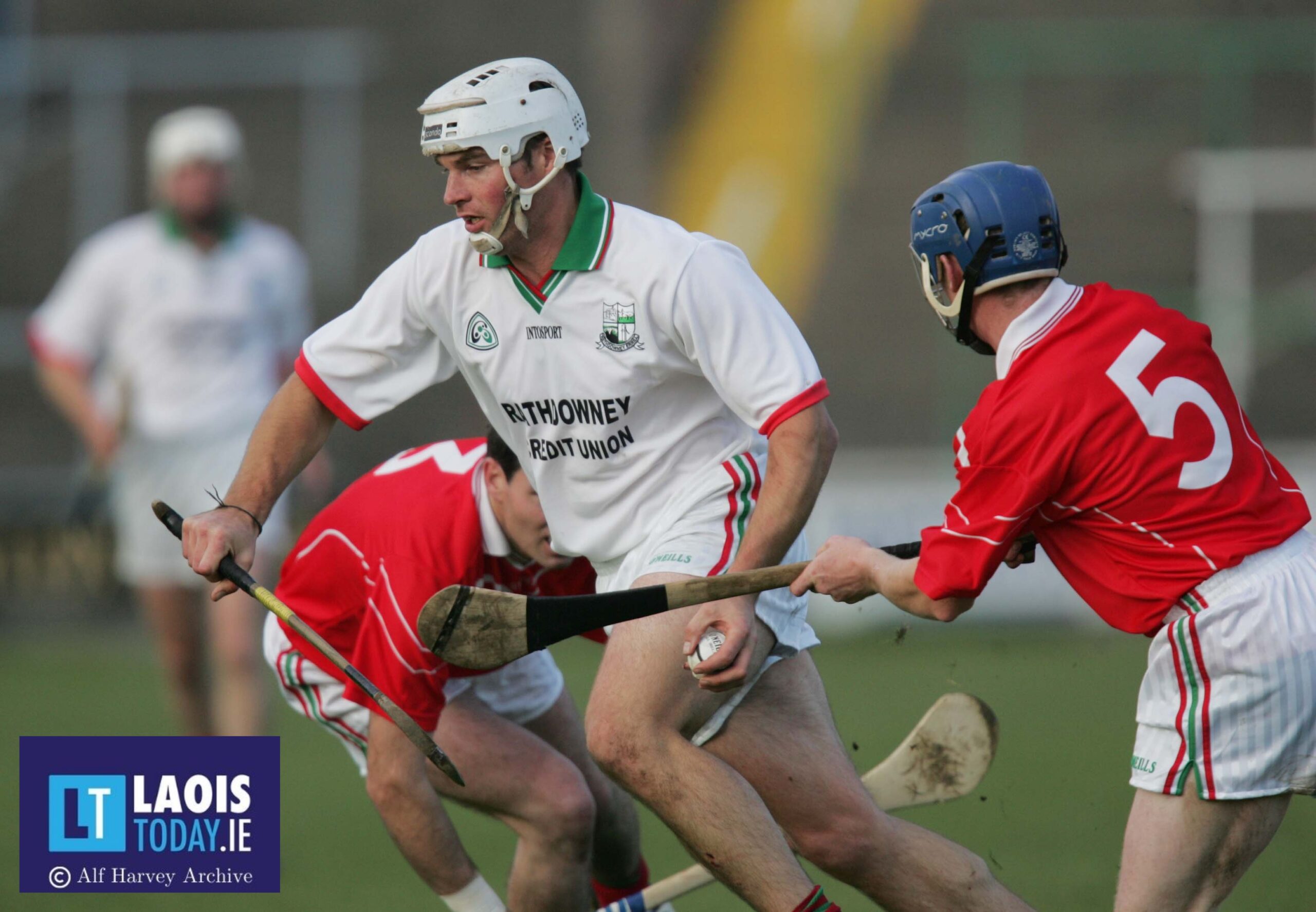 The meeting of Rathdowney-Errill and Tinnahinch was certainly a novel one, being the first final since 1975 that didn’t feature one of Camross, Castletown or Portlaoise.

And a crowd of over 5,000 showed up in O’Moore Park on that October Sunday to see who would make history.

At half time Tinnahinch led 0-5 to 0-4 and they extended their lead early in the second half when James Young rifled a 21-yard free to the net.

Rathdowney-Errill responded well with points from Patrick Mahon and a John Purcell free but James Young responded to keep two in it as the game entered the final quarter. 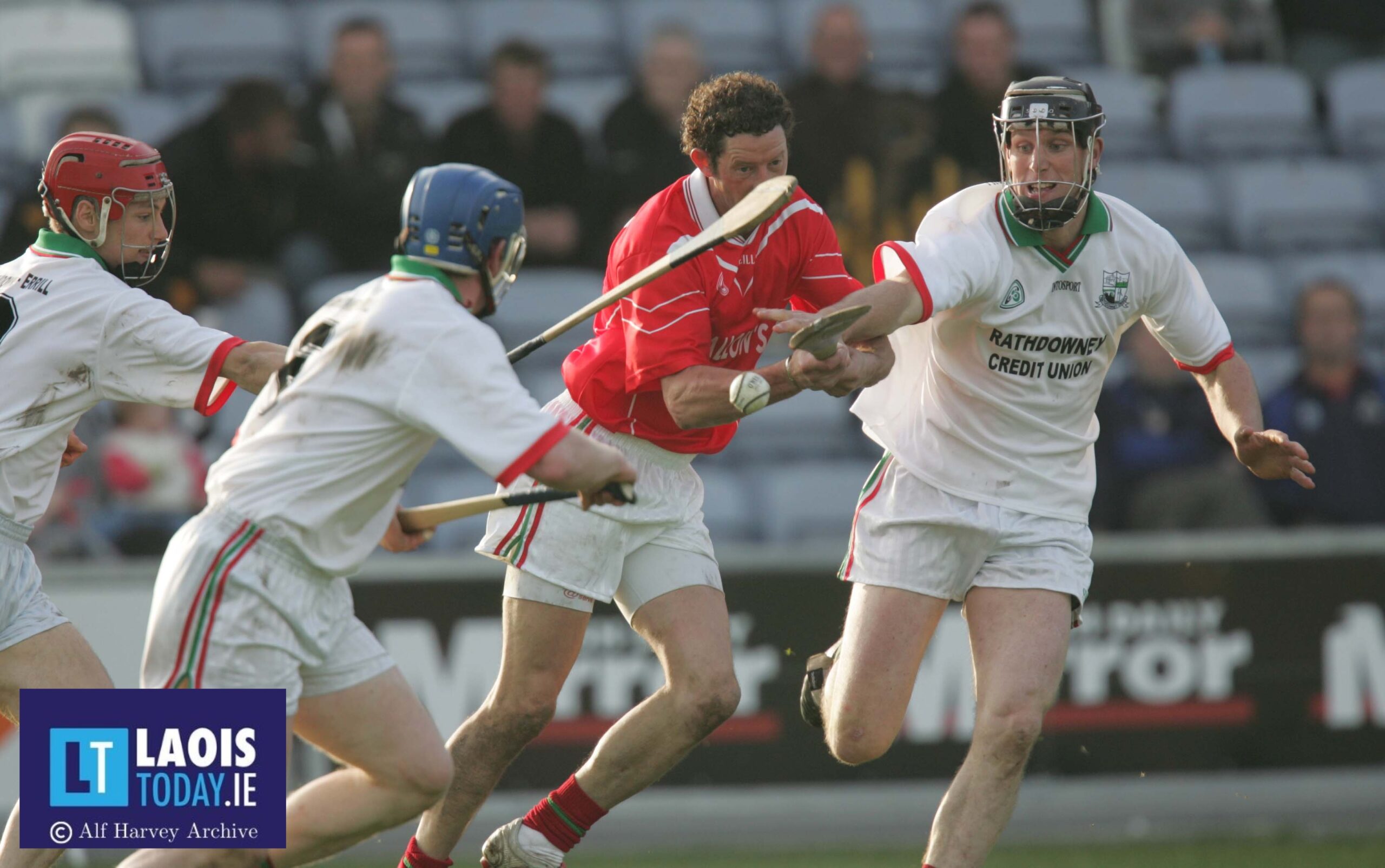 Sub Jason Phelan pulled one back for Rathdowney-Errill and then Purcell, having missed two previous frees, levelled it up.

Liam Tynan nudged Rathdowney-Errill into the lead for the first time since early in the game only for Tommy Tynan to cancel it out.

“But in the 58th minute, substitute Alan Delaney caught a broken ball perfectly and from 25 yards out first timed to the Tinnahinch net,” wrote Keyes.

“Rathdowney-Errill dominated but wides from Tynan, Enda Meagher and Brian Campion did not settle the nerves of their support,” added Keyes before a second Jason Phelan point made sure of the win.

“Steeped in the tradition and love of the game, the united forces of Rathdowney and Errill have now claimed the O’Keeffe Cup,” continued the report. 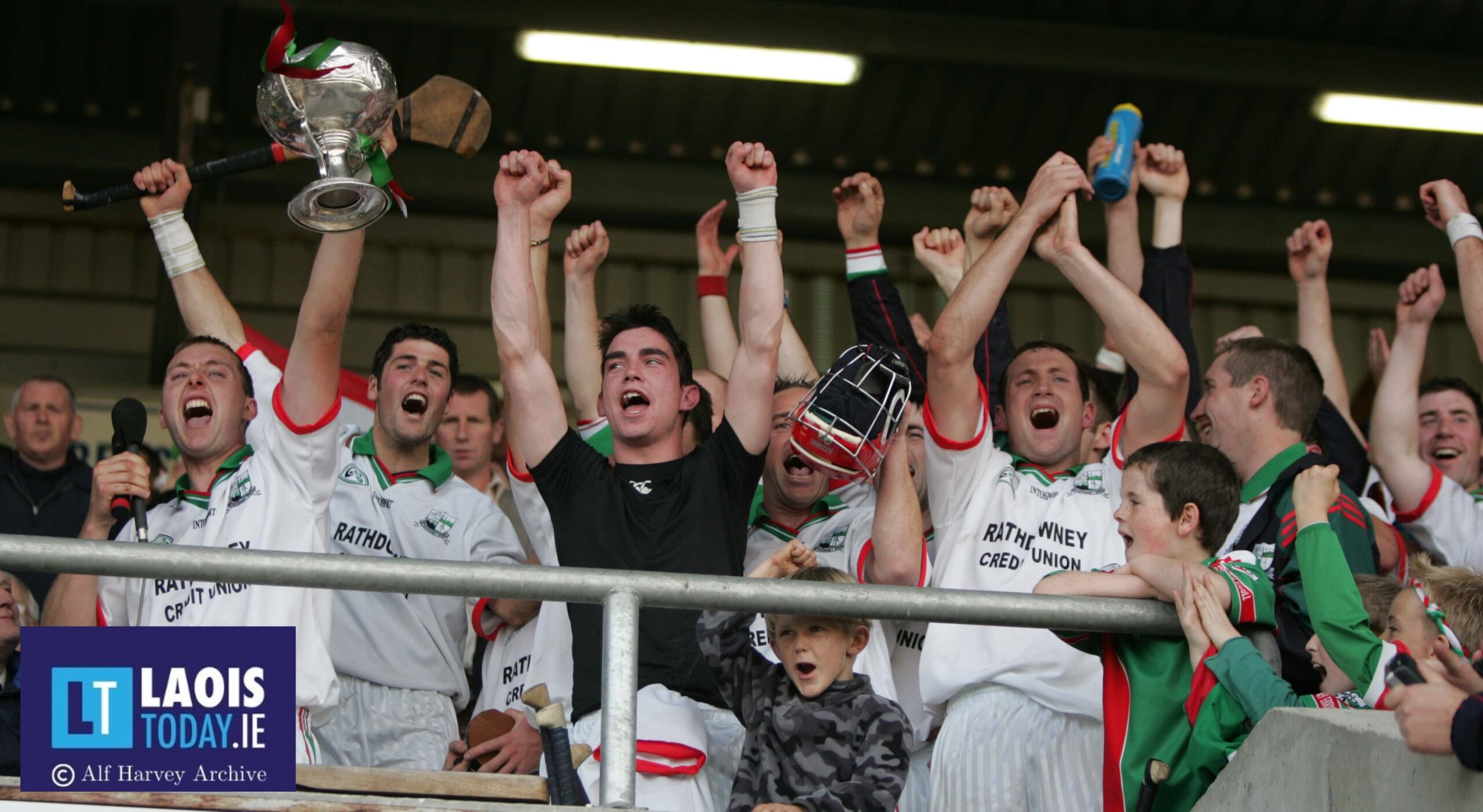 “It returns to their parish for the first time since 1952 and Bob O’Keeffe has not seen the Square in Rathdowney since 1941.

“A long time, a lot of water under the Gully Bridge since the title went south,” he added in reference to the historical nature of the win that it was the first time the trophy had gone to that part of the county in more than half a century.

“For the people of Rathdowney parish, this is a win they will certainly savour. Unbeaten all year it was another trademark performance of digging deep, coming back and timely substitutions doing the business.” 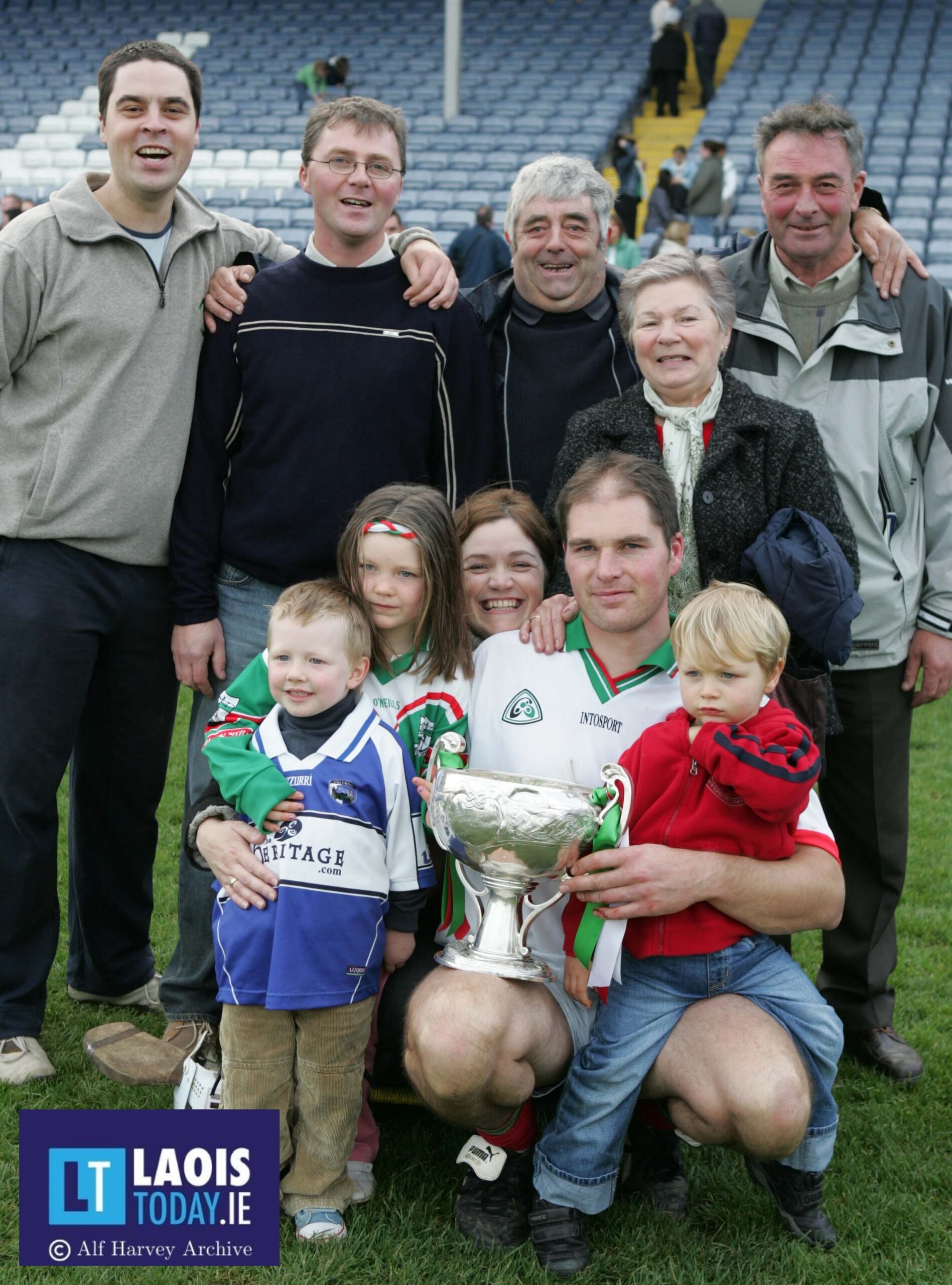 Keyes added that the result was “an endorsement of foresight”. “Amalgamations have been tried in this county and the jury was still out on their success up until last Sunday at 5pm. It could yet be all the rage.”

And that has proved to be the case. Borris-in-Ossory and Kilcotton have since joined and won a senior title in 2016, Park-Ratheniska/Timahoe formed in 2018 and Colt-Shanahoe in 2019.

For Rathdowney-Errill that first success was a significant breakthrough and one they remember very fondly indeed. 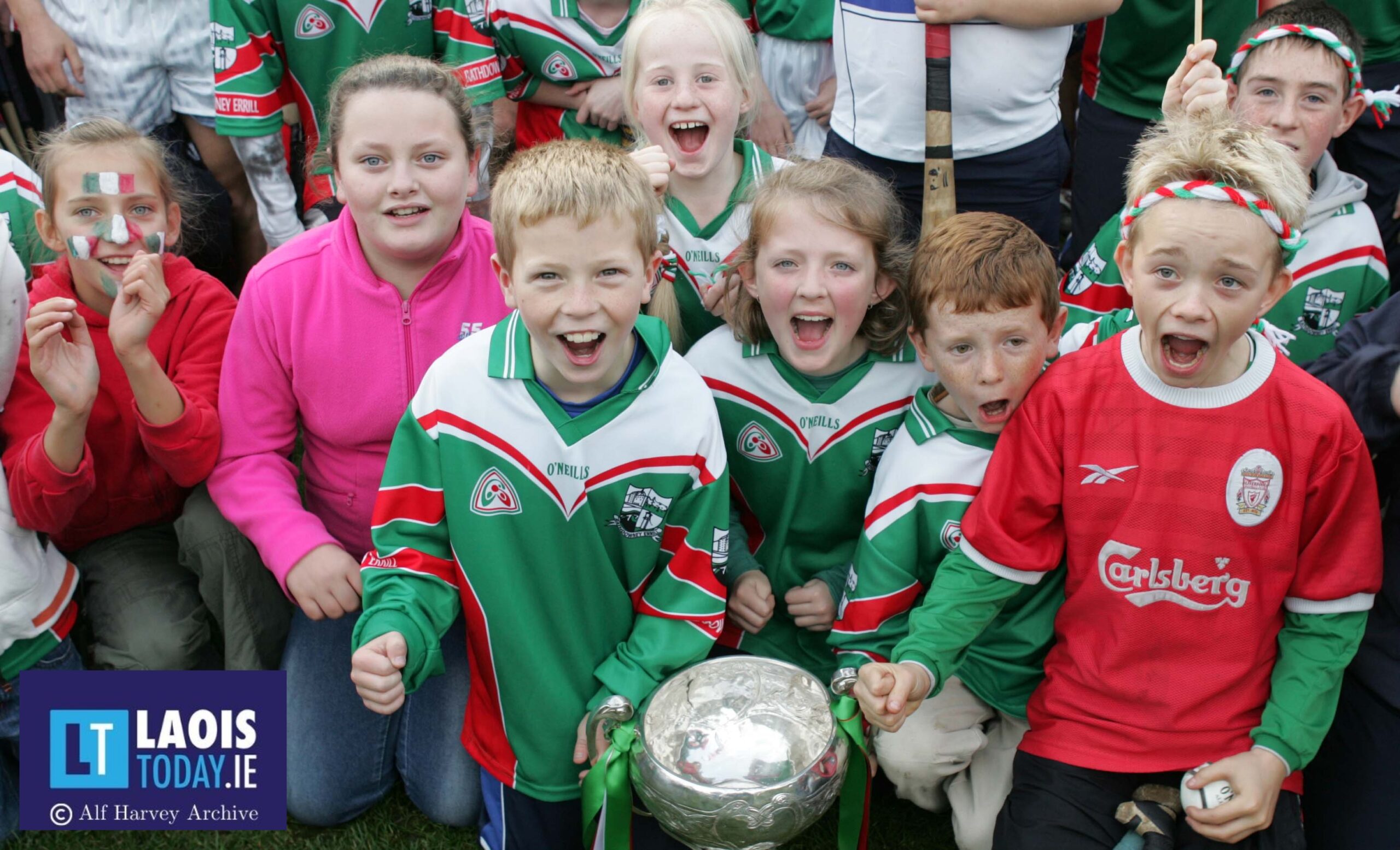 Captain Liam Tynan accepted the trophy and in an interview after the game described his emotions.

“The feeling that’s going through my bones, I’ve never witnessed it before in my life.”

And manager Paul Murphy from Birr was delighted to be able to steer them to a famous triumph. 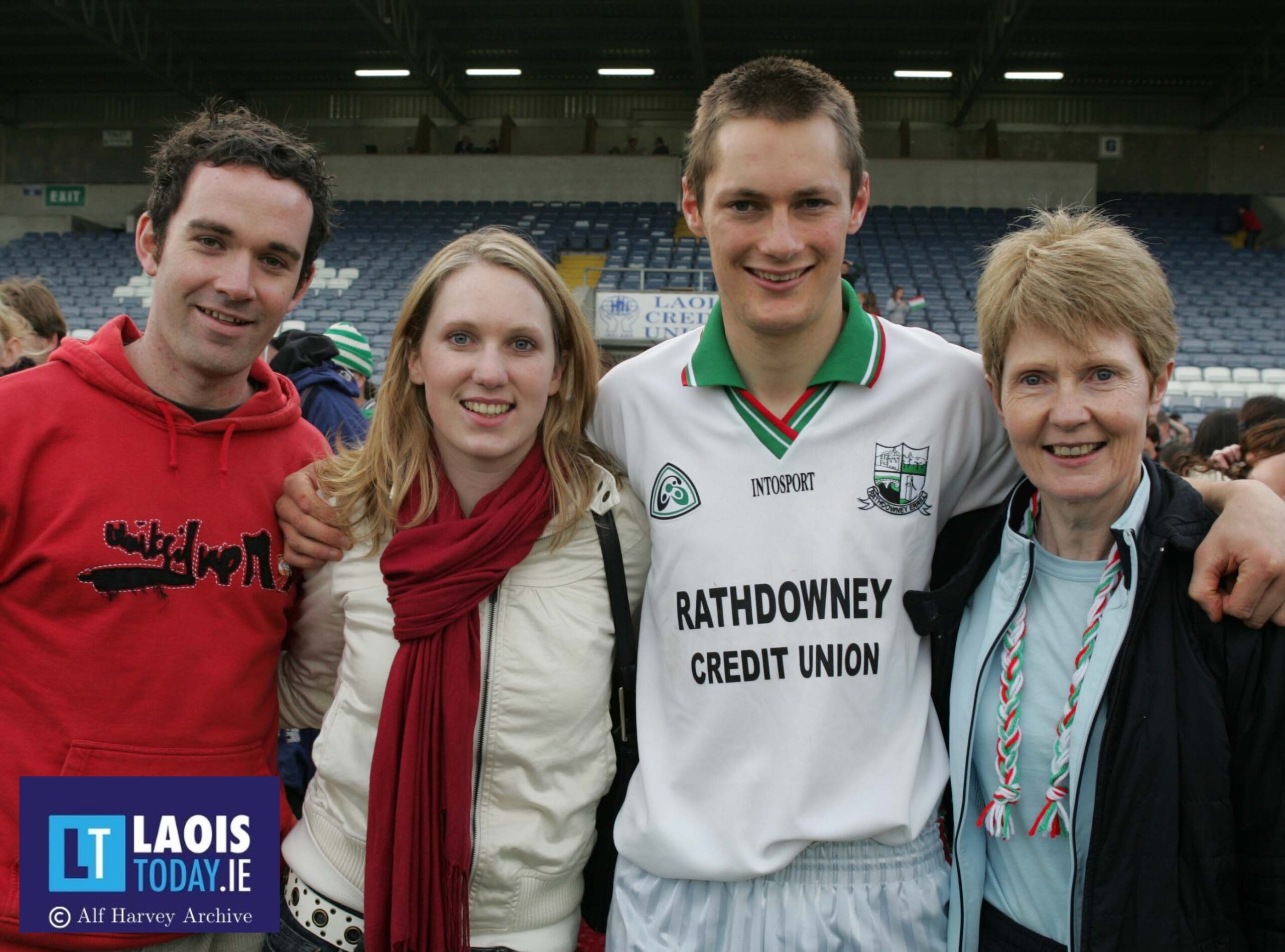 He told the press afterwards how he had met some of the Rathdowney-Errill club officials before the start of the season.

“They told me there was a panel of players capable of winning a county final,” he said. “They just needed to be taken on to another level, someone with a bit more experience which I had with Birr down the years. Thank God everything went well.”

Rathdowney-Errill have since won five more titles – in 2008, 2010, 2012, 2014 and 2019, while Tinnahinch amalgamation continued for a couple more seasons and later also added in Mountmellick but it eventually broke up with all going their separate ways.