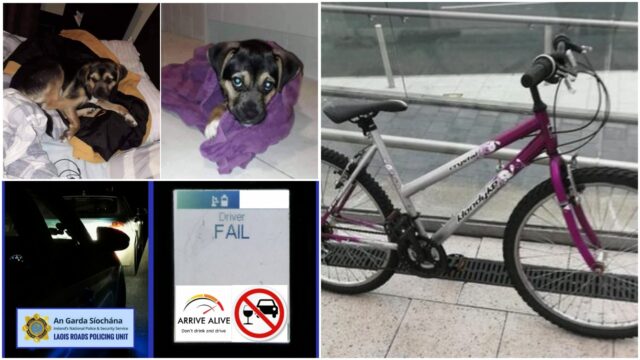 Laois Gardai have been very busy over the last couple of days with reports on drink driving, a stolen bicycle, dog theft and speeding.

On Sunday, Gardai arrested a driver after they failed a test.

Gardai said: “Laois Road Policing unit stopped a driver when they were observed reversing from a minor road onto a major road.

“On speaking with the driver they were discovered to be driving under the influence of alcohol and failed the road side breath test.

“Driver was arrested and taken to Portlaoise Garda Station.

“Charged and bailed to appear before Portlaoise District Court.”

Then on Saturday night, a bicycle was stolen from outside a house in St Brigids, Portlaoise.

Gardai say: “A bicycle was stolen overnight from outside a house in St Brigids, Portlaoise Town.

“If you see it abandoned anywhere or know of its whereabouts please contact Portlaoise Garda Station on 0578674100.”

While also on Sunday, a dog was stolen from a premises in Portarlington.

Gardai say: “Portarlington Gardaí are appealing for the public’s assistance in locating this dog which was stolen from a property in the town on Sunday March 6 between 3pm and 4.30pm.

“The dog is microchipped. Any information please contact Portlaoise Garda 0578674100.”