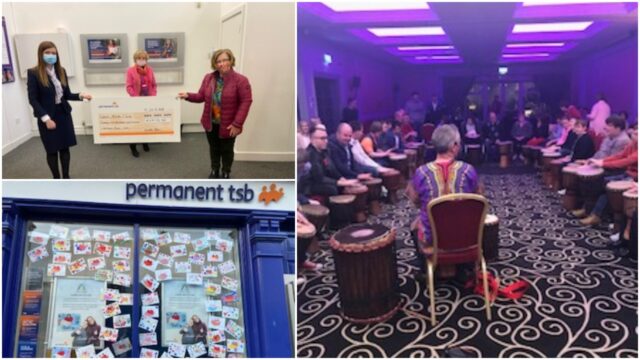 In the middle of such bleak times, it’s wonderful to be able to share a good news story about a local charity.

Last week, Laois Arch Club was presented with a cheque for €29,113.62 by Permanent tsb.

Laois Arch Club is a friendship club for adults with intellectual disabilities.

The club was formed over 30 years ago and is run on a completely voluntary basis.

It relies on fundraising and donations to remain in existence and, as we all know, that is extremely difficult during Covid times.

Laois Arch Club usually provides a social night once a month in The Midlands Park Hotel for around 130 Arch Club members from all over the county.

It also brings a group of about 50 members on an annual weekend away to enable members to socialise with their peers and to give their carers a well-deserved break.

In November 2019, Laois Arch Club was absolutely delighted to be nominated by Portlaoise Permanent tsb for the newly announced Ptsb Community Fund which was to run in each of their five regions across Ireland with a view to raising €100,000 for five chosen charities.

The nomination was as a result of Portlaoise Permanent tsb sponsoring and participating in an African Drumming Session for Arch Club members.

Having seen the club in action, staff became aware of the unique service this club provides.

After being nominated, Laois Arch Club rallied the troops to get as many people as possible to vote by email for their club and, because of the huge support they received, they were absolutely thrilled to be selected as one of the five overall charities.

Staff in Permanent tsb undertook to raise €10,000 for the club, and funds raised by the staff would be matched by the bank, making this a potential €20,000 fundraiser.

Cora Whelan of Permanent tsb Portlaoise, liaised with Laois Arch Club as to how to raise funds and a plan was put in place to hold one big fundraiser.

Then Covid-19 brought the country to a halt and Laois Arch Club thought that all fundraising plans would have to be put on hold.

However, the bank had other ideas. Staff in all 15 branches in the South East Region organised a number of fundraising initiatives including bucket collections, raffles and a staff sponsored walk from a distance.

However, to reach the €10,000 target, additional strategies were required. Stephen Hudson, the bank’s manager, came up with the idea of organising a sponsored 10km guided walk in Derrounce Lake and Walkways in Portarlington on October 17.

Sponsorship cards were printed and a huge number of Arch Club members, volunteers and their families, together with staff of Permanent tsb were all set to go.

Unfortunately further Covid restrictions were introduced and the walk had to be cancelled at the last minute. Instead, Arch Club volunteers undertook to do individual 10k walks from a distance on behalf of the club.

In addition to this, Arch Club Volunteer, Alex Cathcart, undertook to run a marathon in Stradbally woods raising almost €2,000.

In total, Laois Arch Club and staff of Portlaoise Permanent tsb raised over €8,500 to add to the funds.

This was an amazing amount and would not have been possible without the support and huge generosity of the local community and family and friends of Arch Club members and volunteers.

After all of this fundraising, Laois Arch Club was hoping that they would now qualify for the €20,000 donation.

They were absolutely bowled over to hear that the bank had decided that instead of limiting the matched funding to €10,000, they would match the funds raised and Laois Arch Club received the unbelievable amount of €29,113.62.

When Covid-19 brought Laois Arch Club’s monthly social nights to a halt, the club decided that it was imperative to find ways of remaining connected to all their members who have been extremely socially isolated during this difficult time.

They discovered that their members love art and craft activities and competitions, photography competitions and fancy dress competitions.

In addition to being so committed to fundraising for the club, Permanent tsb Portlaoise has facilitated art exhibitions and displays in their windows for all to see.

To thank the bank and all their staff and customers, the club launched a Virtual Hug Art competition and the result of which is currently on display on Main Street in Portlaoise.

Laois Arch Club would like to send a huge thank you to Stephen Hudson, Michelle Allen, Cora Whelan and all the staff at Portlaoise Permanent tsb for this amazing donation which will allow them to continue this essential service to all their members.