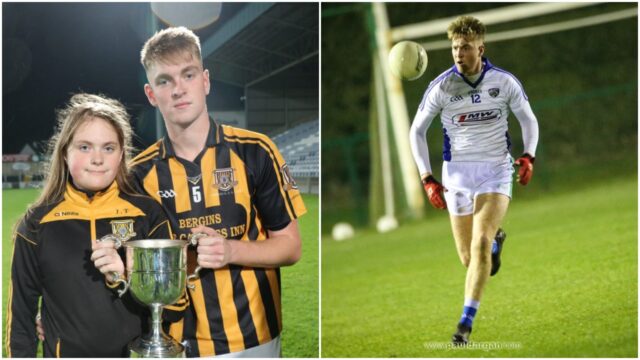 A former Laois minor and U-20 footballer has had his application to transfer from one side of the county to the other accepted.

Rob Tyrrell will play football with Courtwood in 2021 after his application to move there from Camross was approved.

However, he will still maintain a link with his native club as he has been approved to remain playing hurling with them.

Tyrrell is permitted to hurl with Camross as an isolated player as his first club, now Courtwood, do not have a hurling team.

As a footballer, Tyrrell represented Laois in the 2016 Leinster minor football final where they lost out to Kildare.

Three years later, he was midfield on Billy O’Loughlin’s U-20 team that reached the Leinster final only to be denied by Dublin. That same year he made a handful of appearance for the Laois seniors under manager John Sugrue in Division 3 of the National League.

He was a member of Mike Quirke’s Laois senior footballers at the start of last season, making an appearance in the O’Byrne Cup win against Wexford, but did not feature in the league or championship after that.

The midfielder has played for Camross at adult level since 2017 and he also played senior football in 2017 and 2018 with Ballyfin Gaels as part of an amalgamation that included Slieve Bloom.

But his quest to play at the highest level in Laois was halted in 2019 when ‘gaels’ teams were banned from competing in championships following a Croke Park ruling.

In hurling, Tyrrell has also represented Camross at adult level since 2017 and was on the team that won the intermediate championship in 2019.

He played premier intermediate in 2020 and will be eligible to do so again in 2021 following this ruling.

He will not be able to play football for Camross though – a side who compete in the junior ‘A’ championship.

His transfer will come as a boost to Courtwood as they look for a better 2021 in the senior championship after narrowly avoiding relegation in 2020 by seeing off Arles-Kilcruise in the playoff final.

SEE ALSO – Laois Abroad: Mountmellick couple who swapped life in the town for skiing, kayaking and hiking in Canada