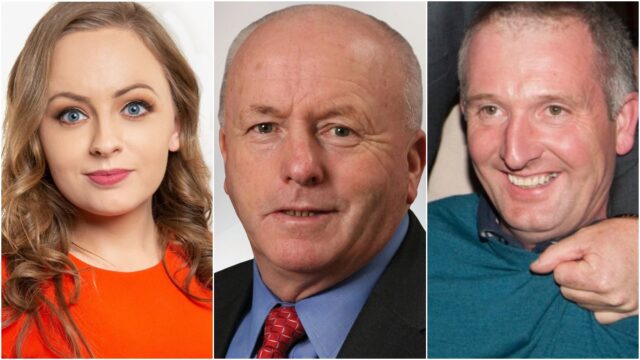 In normal times the Fine Gael delegates from around the county would have gathered in a hotel function room or a community hall.

There would have been excited hand-shaking and back-slapping, queues to register to vote, a nervous tension in the air and possibly even tea and biscuits.

But instead the party’s convention to select a candidate to replace the retired Tom Mulhall in the Graiguecullen-Portarlington Municipal District on Laois County Council was held this evening on Zoom.

As with everything this past year, this was different. For a start it was over and done with in about an hour. But there was also a slightly surreal feel to it. Midlands North West MEP Maria Walsh was the special guest, joining from her office in Brussels. Fine Gael regional organiser Laura Comiskey was in Leitrim.

Chaired by the good-humoured John Martin from Banagher in Offaly, there was over 40 delegates in attendance, including Deputy Charlie Flanagan, Laois County Councillors Mary Sweeney, Thomasina Connell, Conor Bergin and John King and their Offaly colleague John Clendennen.

There was also a couple of former councillors – James Deegan from Stradbally and Percy Clendennen across the border in Kinnity.

But the meeting was essentially about three people – the outgoing councillor Tom Mulhall, who retired on health grounds earlier this year after 12 years in the role; and the two contenders to fill the vacancy, PJ Kelly from Belgrove near Ballybrittas and Vivienne Phelan from Stradbally.

The well wishes flowed in to Tom Mulhall from all speakers; PJ Kelly saying he had “never known a person so passionate about politics”.

“It didn’t matter what party you were. Tom would help you if he could,” he added. “His vote increased by hundreds on each occasion and it was said he was so popular he wouldn’t have to canvass at all the next time.”

“He is a huge loss to Laois County Council,” added Vivienne Phelan. “He covered this area from the very tip of Portarlington to Graiguecullen bridge. Everything from small issues to big concerns, Tom was always there for all parties and none.”

“I’d like to acknowledge the importance of this occasion to Tom Mulhall and his family,” added Deputy Charlie Flanagan. “I’m delighted to see Tom in such good fettle and I wish you well in your recovery and your retirement.”

Cllr Mary Sweeney praised Tom’s “incredible work ethic”; Cllr Conor Bergin joked that when he worked in Charlie Flanagan’s office, “a week wouldn’t pass by without Tom bringing in work for us”. “Hopefully we will have a chance in due course to mark all the work you have done.”

Cllr Thomasina Connell said she missed Tom hugely from the council chamber and he was “a huge educator to me when I entered the council”. Cllr John Clendennen noted the “high esteem that Tom was held in across the constituency”.

And among the first to speak was Tom from his home in Cappakeel near Emo.

Though he suffered a stroke last summer which eventually forced his retirement earlier this year, his good humour and wit was palpable even through the computer screen.

His role on this occasion was to propose PJ Kelly as his replacement. From nearby Belgrove, Kelly has been a long-standing ally and three-time Director of Elections for Tom Mulhall when he was successful in 2009, 2014 and 2019.

“PJ will be very good for this job,” said Tom. “You couldn’t have a better candidate. I’d be hoping PJ goes on to get this position as I know he’ll work very hard for the people.”

Brian Nolan then seconded PJ Kelly, saying he was a local party activist all his life and heavily involved in the Courtwood GAA club where he is the current treasurer, a former chairman and a long-serving player, though he noted that his days might be numbered in that capacity as “he can’t be putting in hard challenges on prospective voters”.

Nominating Vivienne Phelan was her Young Fine Gael colleague Niamh Bakker from Stradbally, who referenced Phelan’s 2019 Local Election campaign when she got over 500 first preference votes.

“I believe she has learned a lot from that experience,” said Bakker. “She is well connected with voters and she has a vision for what she wants to achieve.”

It was then the turn of the candidates to address the meeting with Kelly mentioning his long association with the party, his work at church gate collections and elections and how he will “avail of all the experience of Tom Mulhall” if he was the one chosen by the party.

He also noted that while he was nominated by his own Ballybrittas-Emo-Vicarstown branch, he also received a nomination from the Killeen branch, the base of Cllr Aisling Moran, the party’s other sitting councillor in the district.

“We will work well together for Fine Gael,” he added.

Vivienne Phelan spoke of her involvement with the party at college, branch, constituency and national level.

She too spoke of how much she learned from 2019 election bid and the benefit of “meeting constituents of all ages and backgrounds during that campaign”.

“I want to help make this area a great place to live, work and do business.”

Party members in the district will now be posted ballot papers in the coming days which must be returned by April 10. Somewhere between 70 and 80 members are entitled to vote.

The count will take place in Fine Gael HQ on April 11 with the result announced that day.

The successful candidate will then be officially co-opted to Laois County Council at the monthly meeting on Monday, April 26.