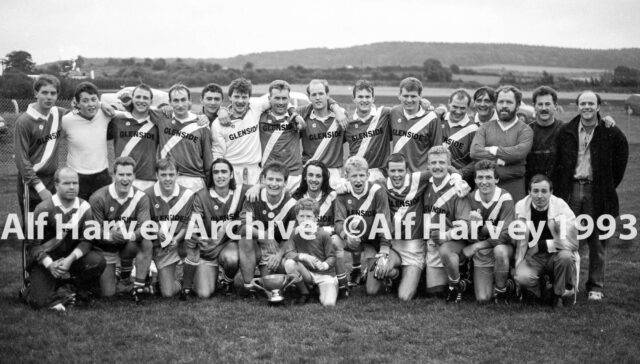 Intermediate football in Laois is generally not known for its high scoring and that was certainly the case on a wild Saturday afternoon in October 1993 when Killeshin got the better of The Rock.

“Despite the bad conditions both teams served up some attractive football,” reported the Nationalist in its report the following week. “It was a credit to both teams that such football was played as the swirling wind played havoc at times with ball control.”

The Rock played with the wind in the opening half but the Nationalist reporter noted that they must have been concerned by being only three points up at the interval.

At the break it was 0-5 to 0-2 to The Rock with Peter Coffey having accounted for three of The Rock’s points and Tom Tynan and Pierce Flynn adding one apiece. Ian McDonald and James McHugh accounted for Killeshin’s scores.

“Killeshin threw everything into attack” in the second half and two frees from McDonald had the gap back to one only for Coffey to respond for The Rock.

But that was to be their last score as Killeshin dominated the final quarter and despite heroic Rock defending, Killeshin slowly turned the game in their favour.

“Firstly Eugene Brennan put over a point and three minutes later in the 22nd minute Eugene O’Rourke found the target with a magnificent free from the 45-metre line.

“The side were now level when Eddie Malone was on target with his attempt with six minutes remaining.

“Despite the bravest efforts of The Rock, they were unable to get back up the field and get the elusive point which would have given them a draw.”

Killeshin would spend only a couple of years at senior before dropping back to intermediate and later to junior in the mid 2000s. But they would eventually build from the bottom up by claiming junior honours in 2008, intermediate in 2011 and reached the senior final in 2019.

The Rock would lose the 1995 final to Rosenallis but beat Arles-Killeen after a replay in 1996 and then reached the 1998 senior final.

They would also appear in a couple of senior semi-finals before being relegated to intermediate in 2013 where they have remained ever since.