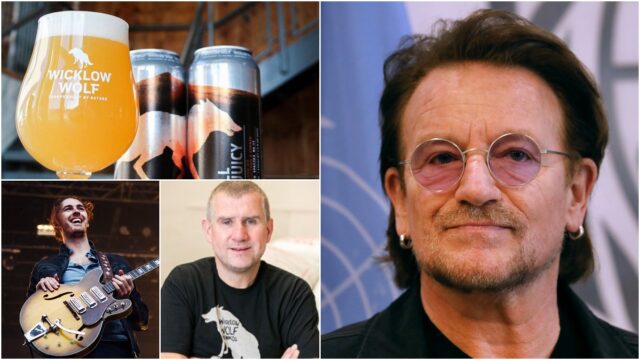 Global music stars Bono, The Edge and Hozier are among those to have invested in recent months in the Wicklow Wolf craft brewery founded by Mountmellick native Quincey Fennelly.

The Wicklow Wolf Craft Brewing Company, which was founded by Fennelly and Simon Lynch in 2014, issued new shares for almost €2.4 million on December 30 last with Bono and The Edge putting up €327,000 between them and Wicklow native Hozier investing almost €110,000, according to The Currency website.

The largest investor, however, on this occasion was Zatrix Holdings, a company controlled by Mary Ann O’Brien, the founder of chocolate maker Lily O’Brien’s.

Wicklow Wolf Brewing invested €4 million in a brewery in Newtown Mount Kennedy in 2019, the funding for which came from a €2 million equity raise according to The Currency, which brought in existing shareholders in 2016.

Enterprise Ireland has also backed the company, in recent years.

Quincey Fennelly is from a well-known Mountmellick family and is the Managing Director of Wicklow Wolf Brewery.

He was part of the Ballygowan team when they are starting out in the mid 1980s and has considerable experience in the drinks industry.

He worked with both United Beverages and C&C Wholesale before he moved to live in San Francisco where he lived with his family for a number of years.

After returning, he set up Wicklow Wolf which now has a range of craft beers available to buy across the country.

They were also giving tours of the brewery prior to the Coronavirus but have plans to open a visitor centre as soon as restrictions ease.

Their website lists six full-time staff members in addition to their distribution company and as part of their expansion they are currently hiring for a Digital Marketing Executive.