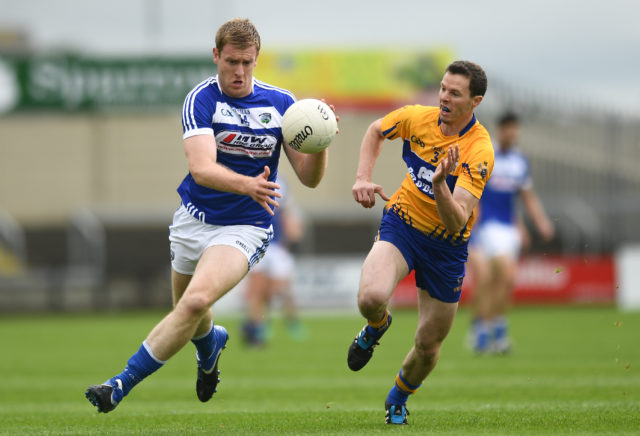 The Laois footballers make their first competitive appearance of 2021 this afternoon when they take on Clare in the opening round of the National Football League Division 2 South group.

Here we look ahead to the action.

This Sunday afternoon, Sunday, May 16, at 4pm in Cusack Park in Ennis. The late throw-in time is because the Clare hurlers are hosting Wexford at 12.45pm and Covid regulations mean that the ground must be emptied before the footballers come in.

Of course no supporters are allowed to attend.

How does the league actually work this year?

So Division 2 – which Laois dramatically maintained their status in last year thanks to a final day win in Enniskillen over Fermanagh – has been split into two groups of four on a regional basis, the same as the other divisions.

Laois are in with Clare, Cork and Kildare with Meath, Mayo, Down and Westmeath in the other group.

The two teams in each group go into the league semi-finals with the bottom two into relegation playoffs. The losers of the relegation games will play in Division 3 in 2021 while the semi-final winners will be promoted.

After today, Laois play Cork at home next Saturday at 7pm before welcoming Kildare to O’Moore Park the following Sunday.

The Laois team was named on Friday night and sees a return to the Laois jersey for Donie Kingston.

The big Arles-Killeen man is back on the panel after missing the 2020 season and is named in the starting 15 for the first time since the All Ireland Qualifier Round 4 game against Cork in 2019.

He lines out at full-forward with his brother Paul and Killeshin’s Eoin Lowry in the two corners.

Evan O’Carroll is named at centre-forward but there is no place in the starting team for last year’s championship top scorer Gary Walsh who has to be content with a place on the bench.

Colm Begley returns to the side at centre-back having missed last year’s championship due to injury while the experienced Mark Timmons, Kieran Lillis and John O’Loughlin are all named to start also.

In total there are four changes to the side that lost to Dublin in last year’s Leinster semi-final with Eoin Buggie, Sean O’Flynn, Brian Byrne and Walsh missing out.

Begley, Kingston, Eoin Lowry and Mark Barry are the ones to come in.

Laois had a point to spare when the sides met in Round 4 of last year’s league in Ennis but before that Laois were knocked out of the championship by Clare in both 2016 and 2017.

When the sides met last year, the teams and scorers were as follows.

Laois and Clare have met 23 times previously in league and championship with Laois having the upper hand with 13 wins. Clare have won seven times with three draws.

In the league they have met 18 times, with Laois having come out on top 10 times and Clare five times. Three times the sides finished level.

Laois won last year’s league meeting between the counties in Ennis while Clare’s last win in the fixture was in 1999 in O’Moore Park.

They haven’t named their team yet but we do know that long-serving players like corner-back Gordon Kelly and midfielder Gary Brennan have retired.

Colm Collins, who is now in his eighth season, is the longest-serving manager in the country.

This is their fifth year in a row in Division 2 but despite good league campaigns they have struggled in the championship since they had good runs in 2016 and 2017.

Last year they were beaten by Tipperary and this year they have once again been drawn to play Kerry.

The Clare team named includes 11 of the side that started against Tipperary in last year’s championship – with the retired Brennan and Kelly accounting for two of those changes while there is also a change in goals with Stephen Ryan starting instead of Eamon Tubridy.

There is no place for former hurler Podge Collins nor new recruit Conor Jordan, a former Kerry underage player.

Paddy Power have both teams at even money with the draw at 15/2. Laois are 28/1 to win the division outright and 9/1 to be promoted with Clare at 22/1 and 12/1 on those markets respectively.

Westmeath and Clare at 4/5 and 5/6 are fancied to be relegated though Laois are next in line at 6/5.

Tipperary’s Sean Lonergan is the man in the middle. He hasn’t overseen any Laois games in though has been on the inter-county circuit in recent years and has taken change of National Football League games, provincial club fixtures and did last year’s Munster U-20 final between Cork and Kerry.

The game is live on the GAA Go App (€5 for one game; €25 for a season pass) while we will be providing minute-by-minute updates on our Live Blogs and there will also be coverage on Midlands 103.