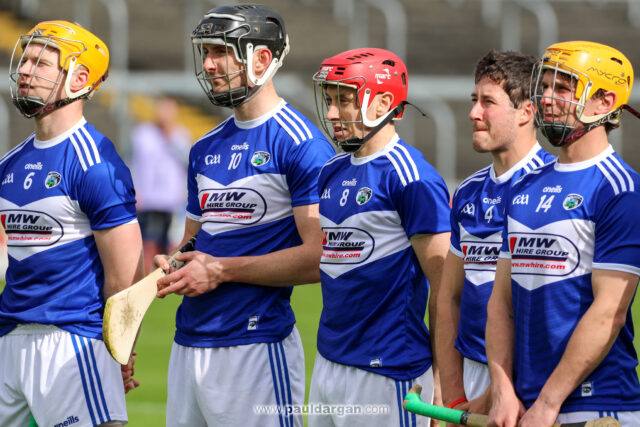 The Laois hurlers take on Clare in Round 3 of the National League this afternoon.

Here we look ahead to all the action.

The game is in O’Moore Park and throws in at 3pm. As is the case throughout this league campaign, supporters aren’t permitted to attend.

The Laois team shows two changes from the side that was beaten by Dublin last weekend.

Conor Phelan and Eoin Gaughan come in for their first starts of the season with Phelan replacing Podge Delaney in the half-back line and Gaughan in instead of Aaron Dunphy up front.

The Clare team listed in the programme includes Tony Kelly at midfield and John Conlon at centre-back though it remains to be seen how accurate that team. Two Clare players have had to be ruled out for this weekend as they were deemed close contacts of Wexford players who have been diagnosed with Coronavirus.

Indeed you have to go back to 2011 for Laois’s last win over the Banner County when they won a Division 2 National League game between the two.

Clare have won the last four league meetings – and 21 of the 24 league clashes in total.

Things haven’t been good in Clare for the past couple of seasons and the County Board have come under intense scrutiny in recent times, in particular over their development of their Centre of Excellence.

Having almost reached the 2018 All Ireland final, they have slipped back in the last couple of seasons. Were heavily defeated by Limerick in the Munster championship last year and though they scraped by Laois and got the better of Wexford, Waterford were too strong in the All Ireland Qualifier.

They have had a very disappointing start to this league campaign – losing away to Antrim in the opening round and then letting a decent lead slip against Wexford last Sunday.

Manager Brian Lohan is under pressure and they really need to win here to avoid a relegation scrap.

Carlow’s Patrick Murphy is the man in the middle this afternoon. One of the new referees on the senior inter-county scene, he took charge of Division 1 league games last year and was the All Ireland minor final referee in 2019.

The game is live on the GAA Go App (€5 for one game; €25 for a season pass) while we will be providing minute-by-minute updates on our Live Blogs and there will also be coverage on Midlands 103.