Twenty years after she proved a lucky mascot for Laois in the All-Ireland senior ladies football final, Mo Nerney is again to the forefront as the O’Moore County bid for a national crown — only this time she is one of the key players.

Countless small children grow up all across Ireland dreaming of the same thing – to emulate their local inter-county stars. Whether it’s Joe Canning, Denise Gaule, David Clifford or Aimee Macken, every child has their own hero that they imagine togging out alongside for a big game at Croke Park.

In some cases, however, the connection goes even deeper than that – and that’s certainly the case for Mo Nerney, who has become an increasingly significant player for Laois since making her debut in 2013.

Last weekend she was Player of the Match as they beat Roscommon by three points in a thrilling National Football League Division 3 semi-final, and that’s become par for the course for the Timahoe player and Heath native.

It was all the way back in 2001, when she was just seven years of age, that Mo made her first big stage appearance in a Laois jersey.

She had the honour of togging out as mascot for their memorable 2-14 to 1-16 All-Ireland final victory over Mayo at Croke Park, a famously auspicious day for Laois.

Having lost their previous seven final appearances, they finally got over the line, Mary Kirwan pointing a late free to confirm a landmark win.

“I still remember so much of it. I can remember driving up, stopping in the Red Cow with all the team where they had a fry up for breakfast, you’d certainly never do that now!” says Mo.

“Then the team went to a club ground to do their warm-up and got a Garda escort into the ground, I got to shake hands with President Mary McAleese, and you had the incredible scenes at the end when Mayo messed up a short kickout and Mary got that free to win it.

“We were in the dressing rooms on the Cusack Stand side of the ground and I went to give back my jersey as if I was playing, and everyone told me to keep it. Then there was the open top bus celebration in Portlaoise after, it was all incredible.” 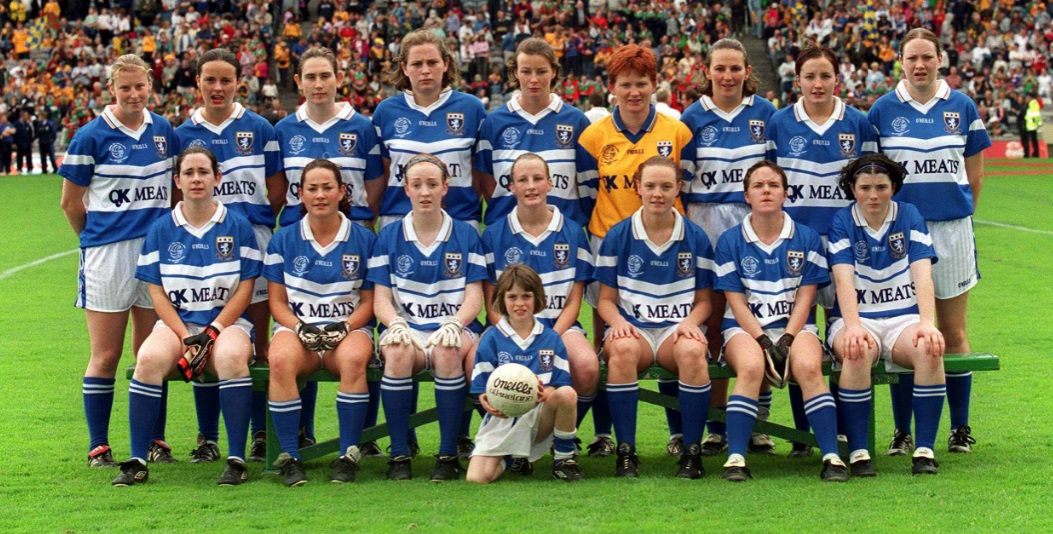 Happy memories, a famous and historic win, it’s everything a child could dream of – but for Mo, it meant even more as it had been an incredibly tough year for their family.

“I was seven years old, the youngest of five in the family, and my Mam had died earlier that year.

“On a personal level, it was really tough and the Laois ladies became a second family to me. Lulu Carroll and Mary Ramsbottom were in our local club, they brought me to all the training and the matches. It felt like such a close group, and even as a child I felt part of it, and it’s a feeling I’ll always remember.

“From the age of three or four, I just wanted to play football, but from that year on I was determined that I was going to play for Laois one day and be part of that group.”

The idea of just borrowing a county jersey, of leaving the county set-up in a better place than you found it, is a very common one among inter-county players of all codes.

Yet because of this hugely formative experience, there’s extra resonance to Nerney’s words when she talks about this idea.

“When Laois got relegated from senior in 2017, it was a huge blow to all of us. We all grew up watching Laois teams compete for senior All-Irelands, and the county, and us as a group, have slipped away from the level we need to be at.

“That’s part of the reason why this coming League final against Kildare is so important, because we need to be playing better teams and to compete at a higher level.

“I remember how I felt as a child, that the Laois ladies were one big family. Now we need to get to a stage where the U-14s and U-16s in the county are looking on and thinking ‘I want to be one of them’.” 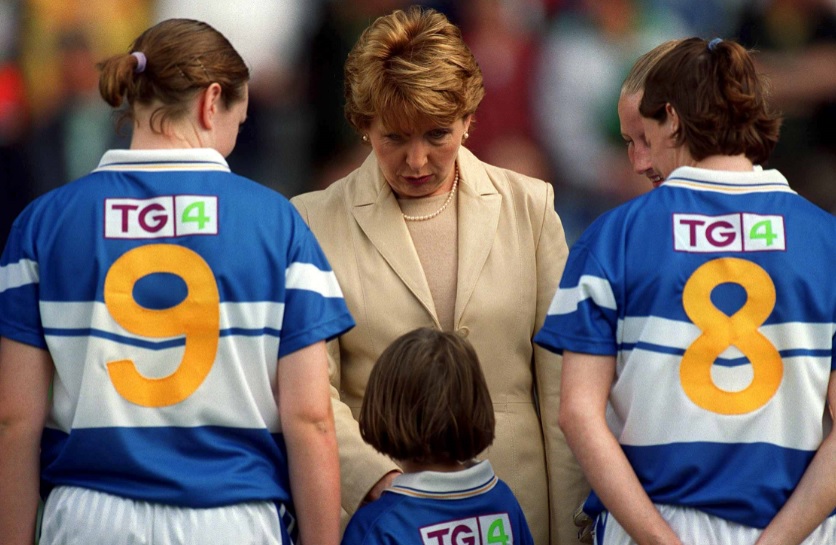 Moving up the ranks won’t be easy. Laois have beaten Kildare already this year, but there was a significant gap between the Lilywhites’ form in the group stages, where they scraped over the line against Longford and Wicklow and were well-beaten by Laois, and how they performed in the semi-final against Sligo, when they were hugely impressive against the previously unbeaten Yeats County.

“That looked a lot more like the Kildare team of 2020,” says Mo, who adds that being drawn in the same group as their Leinster rivals in the championship won’t have any bearing on the league decider on Sunday week. 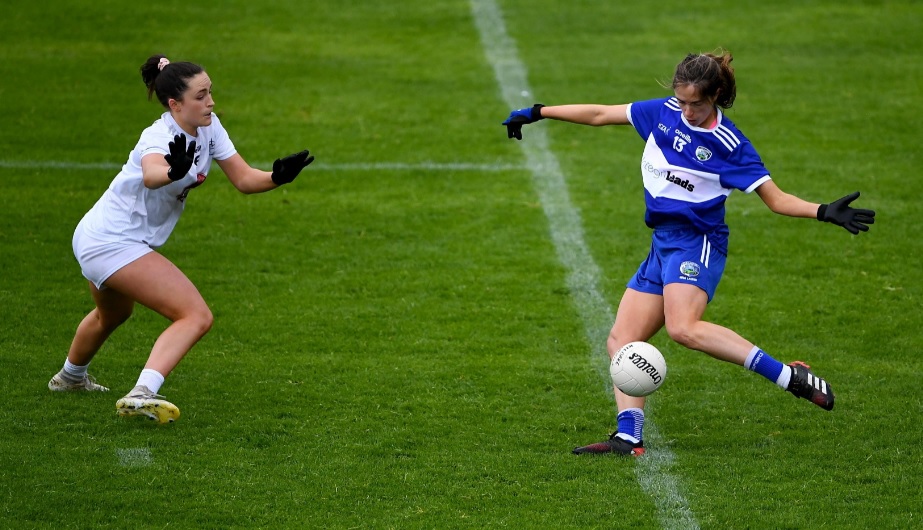 “There won’t be anyone keeping anything in reserve, or not showing their hand. If you want to win an intermediate championship and get back up to playing senior football, which we definitely do and I’m sure Kildare do too, getting up to Division 2 is very important.

“Westmeath will probably start as favourites for the intermediate championship this year, so they’re the benchmark. Look at what they’re doing in the league. They played top teams in the group, then had a great win over Tipperary to avoid relegation.

“The standard of football at intermediate level has gone so high, it’s not easy to get up out of it but I do think we have the talent in Laois to do that.

“(Manager) Donie Brennan has put in place a really professional set-up with Maggie (Murphy) and John Murphy there as well, we’ve a strong panel with nearly 35 players that has seen a good few changes from last year, and then a game like the league semi-final against Roscommon would make you feel good about where we’re at as well. 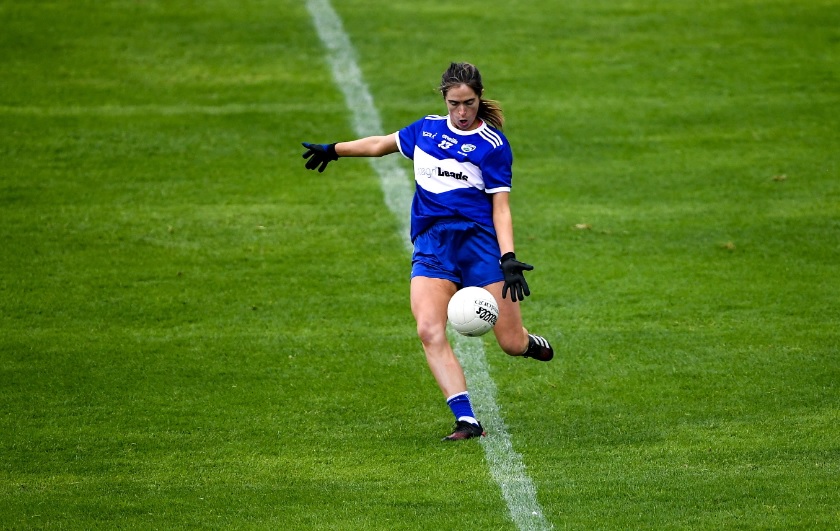 “Roscommon always bring a championship-like intensity to things, there were nine goals in the game and we came from seven points behind to win, so we’re definitely on a good track.

“It’ll take time of course, but I do think getting back to being competitive at senior level is realistic.”

It’s been an incredibly busy year for Mo, on all fronts. When collective training was still not allowed within Gaelic games, she joined up with Athlone Town to prepare for their campaign in the Women’s National League, while she also manages ‘Pretty Woman’ Boutique in Naas, which is owned by her sister Tara.

“To be honest I’ve felt like a business owner, such has been the stress of it all!” she says. “It’s been so stop-start, particularly having such a narrow window before Christmas, but since re-opening on May 17 it’s been very encouraging, business has been a lot better.”

So, it’s not just on the field that things are looking up for Mo Nerney – but on both fronts, there are some really big days coming that have the potential to make it either disappointing or a really great year for the former All-Ireland winning mascot!

Laois take on Kildare in the Division 3 National Football League final next Sunday, June 27, in Baltinglass.