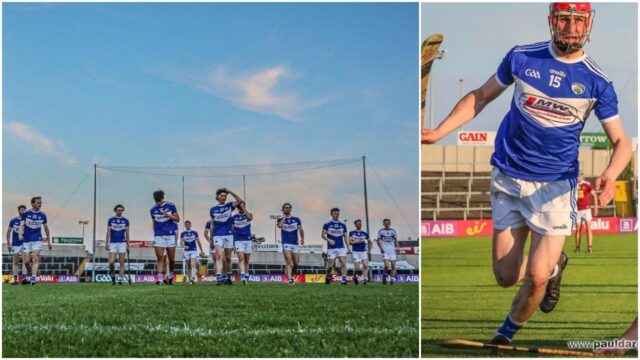 The Laois U-20 hurlers reached Round 2 of the Leinster championship following a dramatic extra time win over Westmeath last night.

Ollie Halley’s charges were 15 points up at the start of the second half but saw their lead chipped away at by the visitors.

So much so that when the game entered the injury time, a Westmeath goal from Jack Gillen actually gave them a one point lead.

Keyes brought Laois back to within one by half time in extra time and they finished very strongly after that.

In a crazy game, there were fine performances all over the field for Laois.

Ciaran Burke was a rock at the back while Keyes, Thep Fitzpatrick, Tadhg Cuddy, Gearoid Lynch, Ciaran Byrne and Mark Hennessy all shone at different stages.

But Laois’s best player was corner forward James Duggan of The Harps. He finished the game with 3-5 and the clip below is deep in the second half of extra time.

Duggan first fired a shot narrowly wide and can be seen clearly beginning to cramp up after doing so.

But when Westmeath try a short puck-out, he leaps in the air and intercepts the ball but lands on his knees.

Knowing that if he tried to get up, he’d likely be bottled up, Duggan showed incredible cleverness to slap the ball over the bar while on both knees.

Laois will face Antrim next Tuesday evening in O’Moore Park – where we’re sure more drama will ensue.

After extra time the final score was Laois 4.33 V 4.27 Westmeath