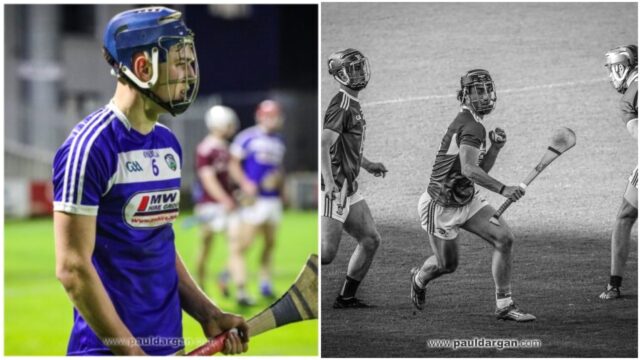 Laois U-20 hurling manager Ollie Halley has heralded the commitment and conditioning of two of his players who played more than 140 minutes of inter-county GAA in 48 hours last week.

Ciaran Burke and Allan Connolly played at centre back and full back respectively for the U-20 hurlers on Tuesday night in their extra time win over Westmeath.

Less than 48 hours after that mammoth encounter, the duo were on the pitch in Aughrim as the U-20 footballers took on Wicklow.

While Laois unfortunately lost that game, Burke lined out at midfield while Connolly operated at centre back for another 60 plus minutes.

The duo, along with Clonad’s Fionn Holland, committed to both panels and U-20 hurling boss Halley paid tribute to them for managing both codes.

He said: “They are absolutely super athletes and they mind themselves so well.

“Allan, when he was in with the senior hurlers at the start of year, had sessions with the dietician and I know he was very impressed with how Allan was looking after his body.

“Ciaran is the same. The two of them are going to go on to hurl or kick football for Laois at senior level.

“On Wednesday morning after our game, the two of them were recovering to try and get going again for Thursday.

“It is an incredible achievement to be able to turn around and play both codes in such quick succession.

“Fionn Holland was also there too. I know he didn’t come on for us on Tuesday but he is in or around the 24 as well.

“To train two nights a week with us and two nights with the footballers is fair going.

“It is of course a terrible pity that the footballers are out, but it would have been very hard for the lads to keep that Tuesday-Thursday schedule going for an extended number of weeks.”

After Tuesday’s dramatic win over Westmeath, Laois will now play Antrim in Navan in Round 2 next week.

And manager Halley is expecting another tough encounter.

He said: “I had the benefit of looking at their game against Down on Tuesday night and they were impressive.

“They play a very traditional style game and have two corner forwards that are very lively.

“I think Laois, Antrim and Westmeath are all around a similar level so it will be another gigantic battle and one we are looking forward to.”