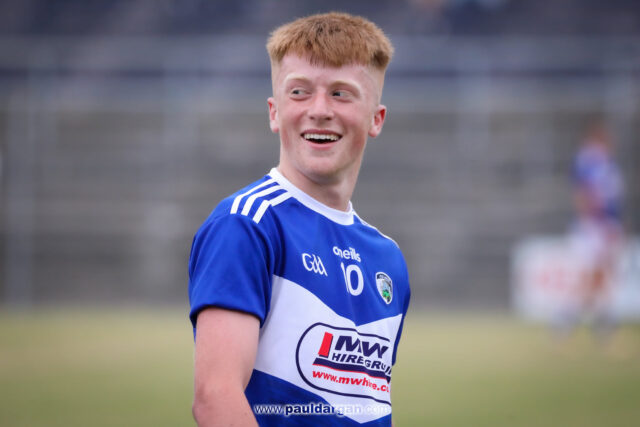 Rioghan Murphy scored a goal in either half as Portarlington collected their first win of 2021 following an emphatic victory against Courtwood this evening.

After suffering a heavy defeat against Portlaoise in Round 1, Martin Murphy’s charges knew that only a win would do if they were to have any chance of reaching a league semi final.

And this 15 point win, coupled with O’Dempsey’s victory over Portlaoise, means all four sides are level in the table on four points each with one round of games to go.

Visitors Portarlington started this one with a brace of Jake Foster frees but they were both cancelled out by Danny Luttrell for Courtwood by the tenth minutes.

The game was very close in that opening quarter as the sides then traded points with Foster and Colin Slevin seeing efforts matches by Niall Dunne and Cian Doyle.

Ronan Coffey gave Portarlington a lead that they wouldn’t relinquish on the stroke of the water break to put them 0-5 to 0-4 ahead.

The game’s first goal arrived soon after as Stephen O’Neill set up wing forward Rioghan Murphy. His shot was saved by Eoghan O’Neill but he made no mistake from the rebound.

Courtwood responded with an Alan Kinsella free but that would be their final score of the half as Portarlington reeled off six points without reply.

Stephen O’Neill and Jake Foster landed braces while David Murphy landed a mark and Colin Slevin kicked another to leave it 1-11 to 0-5 at half time.

The second half was more of the same as Portarlington continued to increase their advantage.

It began with the sides trading points as Ronan Coffey and Adam Ryan pointed either side of Danny Luttrell and Alan Kinsella efforts.

Kinsella then had a goal chance when Niall Dunne put him through but Portarlington keeper Sean Mooney denied him – tipping his shot over the bar to leave it 1-13 to 0-8 at the second water break.

Jake Foster and Daragh Galvin extended Portarlington’s lead on the resumption and the game was put to bed seven minutes from the end when Colin Slevin set up Murphy for his second goal.

Niall Dunne hit Courtwood’s final point but Portarlington finished with a flourish as Stuart Mulpeter scored a goal and a point.

The group will be decided next week when Portarlington face O’Dempsey’s and Courtwood travel to Portlaoise.