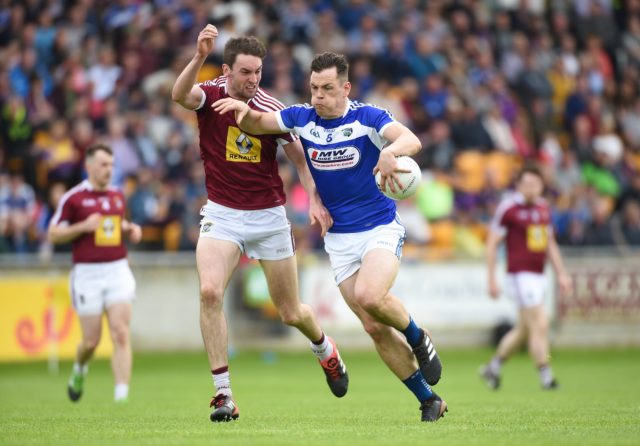 The Laois senior footballers go in search of their first win of 2021 in today’s Leinster quarter final against Westmeath.

Laois have won their last two championship encounters with Westmeath – both in this venue.

But they have lost their last three league meetings – so there is very little between the sides.

A limited number of supporters are permitted to attend and no tickets will be available on the day.

They Kerry native has made two changes to the starting team from the side that lost the Division 2 relegation playoff to Down two weeks ago.

Graiguecullen’s Mark Timmons and Portarlington’s Robbie Pigott drop out of the team with Trevor Collins and Danny O’Reilly replacing them.

Collins is gone in as a straight swap for Pigott while Seamus Lacey has been named at full back with O’Reilly going to wing back.

The rest of the team is unchanged with Timmons and Pigott dropping to the bench in place of Marty Scully and Benny Carroll.

Westmeath have also named their team:

As disappointing as Laois’s really – albeit the defeats have been by a smaller margin.

Mayo, Down and Meath got the better of them in the league while, despite scoring 25 points against Cork, they also lost the relegation playoff to drop to Division 3 for 2022.

In terms of championship history, Laois defeated Westmeath in 2018 and once again in 2019.

Before that, we have to head back to 14 years ago when Laois and Westmeath played a two-part thriller Leinster Final, which saw Laois lose their crown and Westmeath claim their first Leinster title ever under the guidance of Paidie O Sé.

That game was the build up of almost 10 years of rivalry where Laois and Westmeath battled for Leinster minor and U-21 titles.

Most of those games were played out in Tullamore as well, and on those occasions Laois came out on the losing side, a theme which Laois reversed last year and will be hoping to do again.

David Coldrick of Meath is the man in the middle for today’s game.

The last time he officiated a match involving Laois was a Round 3 All-Ireland Qualifier win over Offaly in 2019.

Westmeath are favourites for this game at 8/15 while Laois are 2/1. The draw is 17/2 and the handicap is two points.

What happens after thus game?

If Laois win, they progress to the Leinster semi finals for the fourth successive year.

If they lose, they are out and their season is over for 2021.

We’ll be live-blogging the game on LaoisToday.ie. Midlands 103 will provide commentary while it is available to watch on GAA GO.