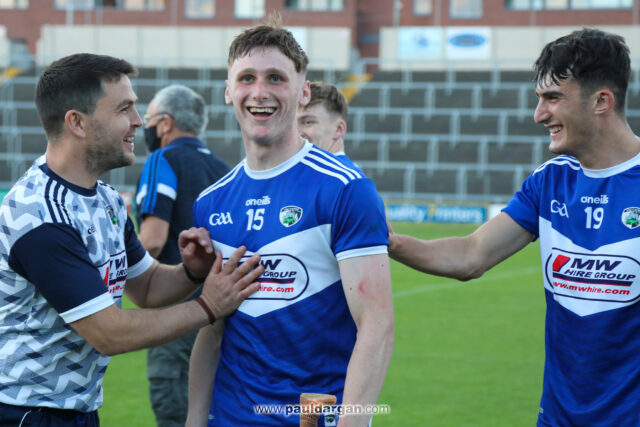 Ollie Hally’s Laois U-20 hurlers are back in action this evening as they aim to take a place in the Leinster quarter final.

Navan is the destination for a clash with Antrim and Laois are the bookies favourites.

Laois were 15 points ahead of Westmeath at the start of the second half but threw it all away and needed a last gasp point to force extra time.

James Duggan top scored with 3-5 while Mossy Keyes showed nerves of steel at crucial times as Laois advanced by six points in the end.

In a crazy game, there were a number of standout performances.

Danny Brennan and Ciaran Burke were rock solid in defence while the aforementioned Keyes and Thep Fitzpatrick scored heavily from midfield.

Gearoid Lynch and Cathal Murphy were powerful on the wings while Tadhg Cuddy also scored some very important points.

Duggan was electric in the full forward line and scored one of the most memorable points you’re ever likely to see.

Speaking on the Talking Sport Podcast this week, manager Hally was hopeful that Camross’ Dan Delaney may be capable of playing in today’s game following an ankle injury.

However, he was less positive about the chances of captain Fionan Mahoney who is struggling with a hamstring injury sustained in a challenge match against Offaly.

Antrim reached this stage after a commanding 3-17 to 1-13 win over Down last week.

Rian McMullan top scored with 1-6 while Daire Murphy knocked over five frees so Laois will have to be wary of their threat.

Should Laois advance, they will play either Kilkenny or Offaly in the quarter finals next week.