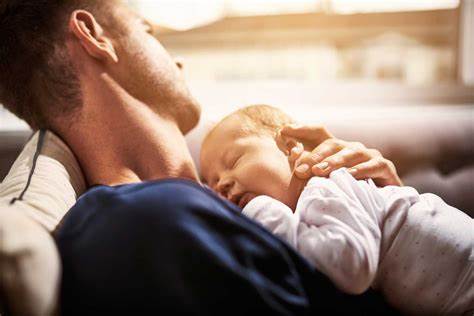 Among the biggest events in life are your own wedding and becoming a parent. The former is more of a gradual process.

You meet somebody you like, you fall in love, you develop a relationship, possibly moving in together along the way and then you get married.

Becoming a parent is more of a jolt. One day you have relatively few responsibilities, the next you have to care for this brand new and delicate life.

There is no doubt that, through pregnancy and labour, women have a harder process in becoming a mother than men have in entering fatherhood.

Our bodies don’t change, we don’t have to alter our diet, we don’t even have to give up things like alcohol or watch our caffeine intake. No sensible bloke would argue that we don’t have it easier.

That said, women are constantly aware of the presence of their baby almost from conception. To many men, becoming a Dad can seem like a flash of lightning. That isn’t to say that women don’t experience similar emotions but new fathers often feel overwhelmed too.

Whilst post-natal depression is far more common in women, and there are very good biological reasons for that, it is something that can also happen to men.

Recently the National Childbirth Trust (NCT) in St. Helens, England called for more recognition of new Dad’s mental health issues. Feelings of depression, whether related to childbirth or not, should always be treated seriously regardless of which gender experiences them.

When it comes to post-natal mental wellbeing, it can be easier for women to look for help. Men often feel they should just get over it or bottle it up. In fact, 38% of new fathers admit concern about their mental wellbeing according to NCT research.

Sleep becomes an issue as can a feeling of inadequacy for what is perhaps the most important task any of us ever face, that of being a good parent.

Reality is though, few Dads look for help, feeling embarrassed that they are suffering from something they had been told only affects women. The truth is depression is no discriminator. It can strike anybody, at any time and nobody should ever feel their concerns aren’t worthy of being aired.

Whether you’re a new mother or a new father, help is out there. Sometimes it is as simple as talking to a friend or loved one. And fellas, think about it logically, if you’re not feeling great, neither you, your wife or partner nor your brand new bundle of joy are getting what you all deserve… the best version of you.