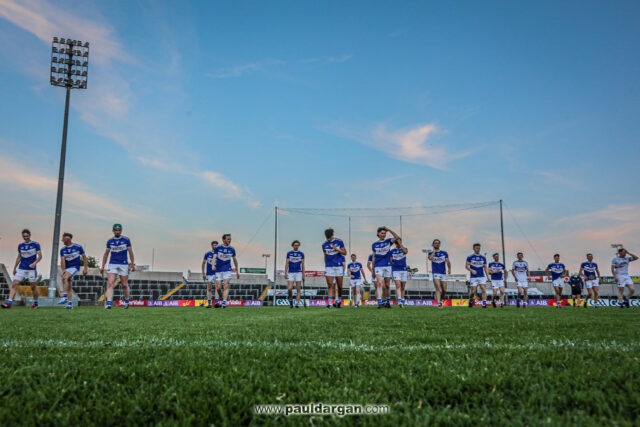 The Laois U-20 hurlers are out of the Leinster hurling championship following a thoroughly entertaining clash with Kilkenny in Nowlan Park this evening.

Kilkenny went into the game as 1/20 favourites but Laois rubbished those odds as Ollie Halley’s men gave their hosts an almighty fright and were desperately unlucky not to win the game.

Laois gave it absolutely everything and can be extremely proud of their efforts this year – but unfortunately tonight it just wasn’t to be.

Kilkenny showed their intent from the start as Eoin Guilfoyle won a long ball and charged forward only for Laois keeper Lorcan Fitzpatrick to pull off a great save.

Tadhg Cuddy put Laois ahead soon after but they would not be so lucky after four minutes when another goal chance presented itself to Kilkenny and this time Conor Kelly took it.

If Laois were rocked by the concession of that early goal, they certainly didn’t show it as they came back to dominate the remainder of the quarter.

Thep Fitzpatrick settled them instantly with a long range free and although Eoin Guilfoyle and Liam Moore pushed Kilkenny further ahead, Laois came storming back.

Two wonderful pieces of skill brought them level. Ciaran Byrne showed lovely stick work to sell two dummys and score before James Duggan pulled off a Cruyff Turn on the 45 and then clipping the ball over the bar.

Ciaran Brennan restored parity for Kilkenny but a late Cuddy free left Laois ahead 0-8 to 1-4 at the water break.

Kilkenny came out for the second quarter and re-took the lead through Eoin Guilfoyle and Cian Kenny.

Cuddy replied with a free but midfielder Kenny instantly cut that out with his second point of the evening.

But Laois were determined to take an advantage to half time – and they did.

James Duggan scored his third of the half from a brilliant sideline cut from Thep Fitzpatrick and then Cuddy slotted his fifth dead ball to leave Laois 0-11 to 1-7 ahead at half time.

Kilkenny instantly levelled the game on the resumption through Guilfoyle and the same player then gave them the lead – only for Gearoid Lynch to level it after 35 minutes.

Thep Fitzpatrick then combined with Duggan who put Laois back ahead but only briefly as Guilfoyle slotted his third free to leave it 0-13 to 1-10 after 40 minutes.

Liam Moore regained the lead for Kilkenny but a massive free from Thep Fitzpatrick from his own 65 made it a draw game once again.

But with the final puck of the third quarter, Padraic Moylan gave Kilkenny a 1-12 to 0-14 lead at the second water break.

Laois almost had a goal on the resumption when Ciaran Byrne set up Tomas Keyes but his shot was blocked and Kilkenny went straight down the other end where Billy Drennan moved them two clear.

And it was a three point lead after 50 minutes when another Kilkenny sub, Ian Byrne, capitalised on a loose pass in the Laois defence to score.

Corner back Peter McDonald then scored from distance, Eoin Guilfoyle tapped over a free and Ian Byrne grabbed his second to give Kilkenny a 1-17 to 0-14 lead after 53 minutes when Laois were awarded a penalty.

Mark Hennessy was fouled in the square and Laois brought on Dan Delaney to take it – but unlike Marcus Rashford and Jadon Sancho, he made no mistake and Laois were back in the game.

Eoin Guilfoyle nudged Kilkenny four clear and then Laois were reduced to 14 men when Tadhg Cuddy was sent off for an off the ball incident with 58 minutes on the clock.

Laois kept battling though and a Dan Delaney free made it a three point game as we headed for injury time.

Laois desperately sought the equalising goal but it didn’t come and their campaign is over for this year.