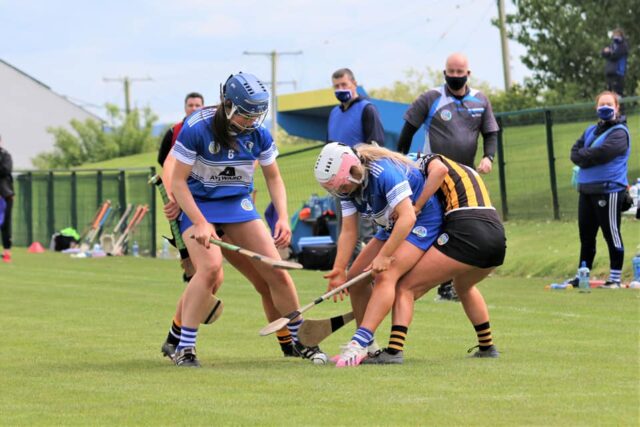 The Laois camogie team will begin their championship campaign tomorrow afternoon in O’Moore Park when they host Derry in their first group game in the All Ireland intermediate competition.

Indeed the fixture list has been kind to John Desmond’s side with two of their three games at home – against Derry and Kerry – saving them long road trips in the process. They will also be away to Tipperary’s second team in the second round.

With two teams to advance, a place in the quarter-finals should be within their range though they will be keen to get off to a winning start.

Since winning their Division 2 relegation playoff against Dublin’s second team back in June, Laois have been active on the challenge match circuit with games against Kilkenny (intermediate), Carlow and Dublin.

But they do have a number of injuries to contend with as Laura Marie Maher, Casey Conroy and Molly O’Connor are all out while Sarah Fleming has battled with a broken hand and managed her basketball commitments where she was recently selected to represent Ireland in the Women’s U-20 European Championships in Hungary.

Jessie Quinlan and Alice Walsh, however, have returned from injury in recent weeks and are named in midfield.

Like Laois, Derry were also in a relegation playoff in the league (they won their semi-final game against Tipperary) while in last year’s championship they were beaten by eventual champions Down in the opening round before beating Kildare in the second round and then losing to Meath in the quarter-final.

In a competition that didn’t include the second teams of the senior counties last year, Laois beat Carlow in their opening game, lost to Down the next day, beat Kerry after extra time in the quarter-final and then lost to Antrim in the semi-final.

In order to progress to the knock-out stages, Laois, who are joint captained by Roisin Kilmartin and Alison McEvoy, must win or finish second in the group.

Two of the group winners will go straight to the semi finals while the other will head to the quarter finals – a draw will be used to determine that.

The three second place teams will progress to the quarter finals. The three bottom placed teams will go into a draw for the relegation playoffs.

The game throws in at 2.30pm in O’Moore Park with an attendance of 500 allowed.