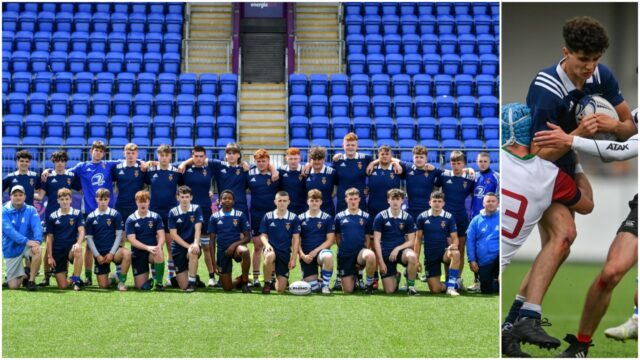 The U-17 Leinster Rugby Shane Horgan Cup got underway on Wednesday and there was a big Laois representation as North Midlands clashed with Midlands in Energia Park.

Eight of the 23 players who featured for North Midlands in the game hail from Laois.

While Ballylinan’s James Walsh plays for Athy and hooker Killian McHugh is a member of Portarlington RFC.

This competition, delayed due to the pandemic, provides meaningful rugby for the provinces best U-17 youth players.

The Shane Horgan Cup is a key part of the men’s Player Pathway in Leinster Rugby and is a club competition that takes place each season between teams from the five different areas of Leinster (North-East, North Midlands, Midlands, South-East and Metropolitan).

Players are selected for trials based on performances for their clubs and players are then selected to represent their areas.

And it is from this competition that the Leinster U-18 and U-19 squads are picked.

Last season Greg McGrath, Martin Moloney, Tim Corkery, Marcus Hanan and Jamie Osborne made their debuts for Leinster in the Guinness PRO14 having come through the Shane Horgan Cup pathway.

In the game itself, North Midlands enjoyed their best period of play in the opening phases, applying pressure steadily in the face of energetic defence.

North Midlands struggled to convert a number of chances, even though half-backs Max Gaynor and James Harris, a Kildare minor, flanker Sean Peters and hooker David Moore all carried positively.

The Midlands defended resolutely as their openside Sam Mills set an outstanding example with fellow back-rowers Jack Boyan and Daragh Brennan close behind.

But, when North Midlands were held up over the line, a set play from the ensuing 5-metre scrum was worked for centre Conor Kelly to waltz through in the 20th minute.

That try was unconverted however and it would prove to be the only score of the contest for North Midlands.

Slowly, the Midlands turned the tide of possession and territory, spending the rest of the half in the right area until wing Sean Brennan made good use of an overlap to make it 5-all at the break.

And they added more scores in the second half to win 17-5 in the end.

The North Midlands face games against North East, South-East and Metropolitan in the weeks to come.