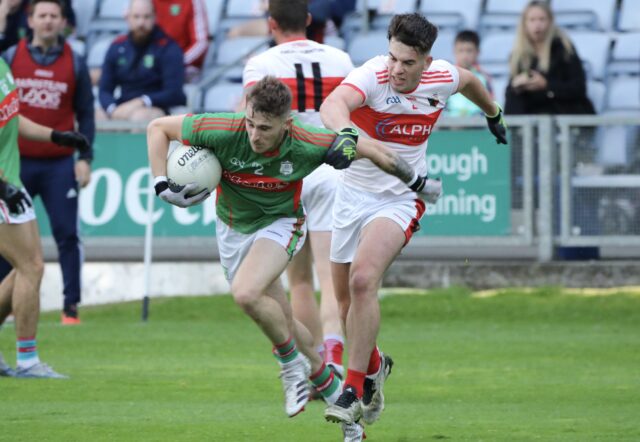 Graiguecullen are through to the Laois SFC final for the first time since 2011 following a thrilling win over Emo in O’Moore Park this evening.

They will pay the winners of Portarlington and Ballyfin in next Sunday’s final – seeking their first title since 1965.

After a 10-month break since the quarter-final, the action resumed in similar conditions as to when it stopped – strong wind and teeming rain.

But Graigue were fully deserved winners, weathering a second quarter revival from Emo to control the second half against the elements. In the end they had four points to spare but there was no doubting their superiority.

The first half was played at a blistering pace. Graigue had the wind and in the opening quarter they made full use of it.

By the water break they led 0-7 to 0-1 with a couple of frees from Danny Bolger and Brian Byrne, a mark from Ross Hennessy and points from play from Shane O’Neill and Chris Hurley. Emo’s only score was a Nigel Murphy point with one of the first attacks of the game.

But Graigue were the better team in that spell and Emo badly needed the water break when it came.

They came to life after the break though and in a welter of excitement, Emo struck for two goals, first from Sean Greene and then Darren Strong.

Graigue hit back on both occasions with points and then Mark Timmons came up from full-back to brilliantly finish to the net from close range.

The drama for the first half wasn’t finished though with Padraig Kirwan setting up Paddy Hosey for Emo’s third goal. Ross Hennessy hit back with a free and Graigue led 1-9 to 3-2 at the break. It was time for us all to draw breath.

With the wind at their backs it looked set up for Emo in the second half. But Graigue were excellent. Danny Bolger set the tone for the half with another brilliantly struck free and then Ross Hennessy got in for their second goal.

Darren Strong hit back with one point but at the water break Graigue led 2-10 to 3-3.

Could momentum switch again? It couldn’t. Luke Alsybury and Chris Hurley added points and heading down the straight they had a six-point cushion.

Emo rallied with a couple of late points but never looked like closing the gap.

A county final awaits next Sunday.