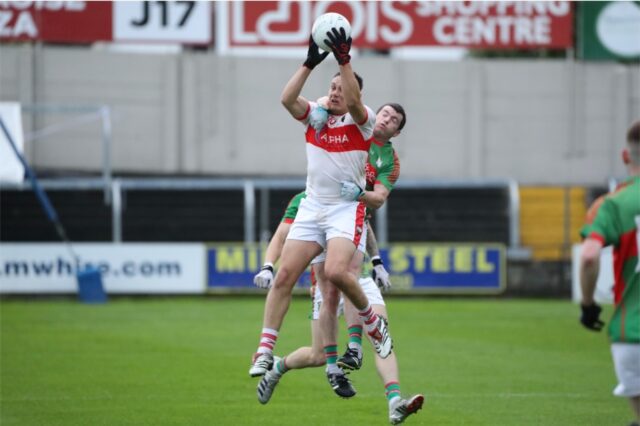 Graiguecullen’s 2-12 to 3-5 win over Emo in O’Moore Park last night sends them into a first county final since they lost to Portlaoise in 2011.

Portarlington and Ballyfin meet in the other semi-final of the delayed 2020 championship this evening with the final fixed for next Sunday, August 15.

Here we look back on seven of the game’s main talking points.

Man of the Match – Danny Bolger

So balanced was Graigue’s performance that picking one individual is a difficult one. Mark Timmons, Luke Alsybury, Shane O’Neill, Chris Hurley, Brian Byrne and Jamie Hennessy were all hugely effective.

But our choice is Danny Bolger, who was excellent in goals.

He pulled off a couple of excellent saves in the first half, his kickouts were excellent and the quality of his long-range free-taking is a serious asset to any team.

With both teams not having played championship football since last October, we didn’t expect such a fast start.

But Graigue had the benefit of the wind in the first half and they wasted little time in making use of it.

They started brilliantly, bringing a high tempo from the off and took all their chances in that opening quarter to lead 0-7 to 0-1 at the first water break.

They conceded three goals in that second quarter but still led 1-9 to 3-2 at half time thanks to an excellent Mark Timmons goal.

That great start gave them a buffer for the remainder of the game.

With the wind at their backs in the second half and only a point down you’d have fancied Emo.

But they were very poor in the second half, managing only three points and never threatening a goal as they had so often in the first half.

Graigue controlled the second half, filtered back when they had to and offered a far greater threat themselves. They were fully deserving winners.

Emo will be hugely disappointed with their performance and letting a chance slip to reach a final after knocking out Portlaoise in the quarter final.

But they only briefly showed glimpses of the form that got them this far. Apart from ten minutes in the second quarter when they got those three goals and their running game caused problems, they never got back to the levels they were at in 2020.

Sean Greene, Padraig Kirwan, Finbarr Crowley and Paddy Hosey all got through a lot of work but Graigue snuffed out their chief scorers and that was crucial.

Mark Timmons did a fantastic job on Jack Owens and Trevor Collins did likewise on Paul Lawlor.

Once Graigue were on top in those battles they were always on to a winner.

Though Emo cut them open on a couple of occasions, they were well alert to stopping those runs out the field.

They conceded a number of frees from 45 metres out in the opening half but it was a small price to pay to limit Emo’s threat.

Graigue haven’t been in a Laois SFC final since losing to Portlaoise in 2011 which in turn was their first since 1981.

Their consistency in reaching the latter stages has now been rewarded by getting to the county final.

But they won’t be happy unless they end a famine that stretches back to 1965 since their last senior title.

Graigue have a short turnaround before they face Ballyfin or Portarlington in next Sunday’s final.

Expect Graiguecullen to be awash with colour this week as flags, banners and bunting go up on the Carlow border.

Emo will have to lick their wounds but have a Division 1B league final next week against Arles-Killeen and then open their championship campaign against O’Dempseys.