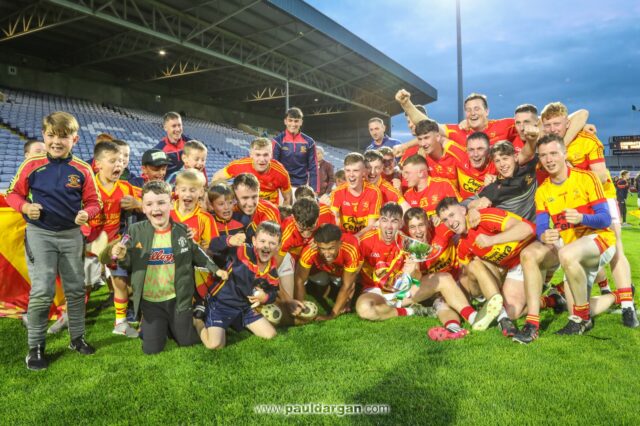 After The Harps got the better of Portlaoise in this evening’s delayed 2020 Premier IHC final, we take a look at some of the main talking points, including our choice of Man of the Match.

Man of the Match – Michael Lanigan (The Harps)

Lanigan has been recording big scores for The Harps ever since he broke onto their senior team more than a decade ago and his 1-9 here sees him edge out debutant James Duggan who finished with 0-4.

Like many of his colleagues, Lanigan has endured disappointing days in O’Moore Park on big days in recent years – but this wasn’t one of them.

He struck for a couple of important points in the first half when they were badly needed and there was no stopping his penalty in the 40th minute that turned the game decisively in The Harps’ favour.

For such a strong hurling club and having won numerous league titles and junior and underage championships, it was hard to believe that The Harps had never won a hurling championship with their main team.

It’s not that they haven’t had success (with All Ireland camogie and a handful of football honours won over the years), but top-level hurling wins had eluded them.

Founded in 1984 following the amalgamation of the Durrow and Cullohill clubs, The Harps were beaten in that year’s county final after a replay by Portlaoise as well as in the senior finals of 1997 and 1998 by Castletown and Portlaoise respectively.

They were relegated for the first time in 2016 and lost the 2018 Premier Intermediate final to Portlaoise and the 2019 decider to Rosenallis. This success is long overdue.

This was a deserved Harps win, one that saw them come from three points down late in the first half to dominate the second half.

The setback of losing captain Daniel Comerford to injury in the run up to the game and Ciaran Burke early in the second half could have derailed them in other years but they took those blows in their stride. Manager Fintan Deegan, who also guided Ballyfin Gaels to success in this competition in 2017, will now lead the club back into senior in two weeks time.

Portlaoise, for their part, put up a good fight in the first half but they ran out of steam early in the second half and allowed the game to get away from them.

They’re back in action in the 2021 championship in just a couple of weeks time but they may struggle to get back to this stage again.

End of a Portlaoise era?

After years of travelling over and back from London to represent club and county in hurling and football, one of the great Laois GAA playing careers had its final chapter (unless there is a change of heart down the line) with Cahir Healy’s last game in the Portlaoise colours.

Healy transferred to a club in London earlier this year but was allowed to play in this game as it was a 2020 fixture. He arrived home this week to play the game before returning to play in the London championship on Sunday.

And it may also be the final time we’ll see Tommy Fitzgerald, another stalwart, in the Portlaoise colours. He had indicated that he wasn’t returning for this campaign but was obviously coaxed out of retirement for this one. With a coaching role with Galway club St Thomas, his hurling priorities may understandably lie elsewhere.

But himself and Healy have given all their adult life so far representing The Town and while it’ll be sad not to see them do so again, they owe club or county nothing and they’ll go down alongside the greats.

The Harps have only two weeks before they return to the senior championship and will begin their campaign against neighbours Clough-Ballacolla. They are also in a group with Rosenallis and Castletown and with three to advance to the knockout stages, they will fancy their chances.

Portlaoise will remain in the second tier and are in a group alongside Camross’s second team, Colt-Shanahoe and Clonaslee.

SEE ALSO – Check out all of Friday’s Laois GAA results