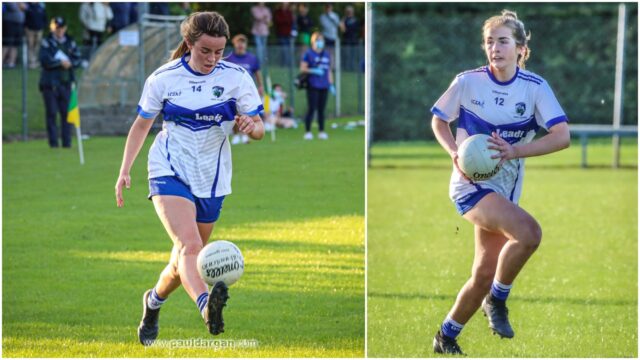 The Laois ladies minor football team are through to the Leinster ‘B’ final following a 14 point win over Offaly in Gracefield tonight.

Martina Phelan’s side had lost to Louth in Round 1 last week and knew they had to win tonight to advance to the final.

And they did following a fantastic team display where every player shone at different stages.

Centre back Georgina Donovan was very dominant in defence and her ability to make interceptions and crucial tackles provided the platform for victory.

While Fiona Fennessy, who switched to wing back tonight as Emily Corbet came into the team at wing forward, also created several scoring opportunities from her new position.

Offaly actually started the quicker of the teams and had 1-2 on the board early on.

But Laois came roaring back as Orla Hennessy, who had played for the seniors in the All-Ireland semi final against Wexford at the weekend, got through for a goal.

Ciara Crowley then fired in a second goal to give Laois a lead that they would never relinquish.

Hennessy added a point before Emily Corbet blasted in a goal to move Laois six clear.

Maebh O’Brien tried to keep Offaly in it but a point from Kelly O’Neill left Laois 3-4 to 1-5 ahead at half time.

Hennessy, O’Neill and Aisling Fitzpatrick added further points for Laois on the resumption of play but Offaly refused to go away.

Sarah Murphy fired in their second goal and they then added a point to narrow the gap to four.

But Laois won a penalty soon after when Ciara Crowley was fouled and Kelly O’Neill made no mistake from the spot. She then added a free to leave Laois 4-11 to 2-9 ahead at the second water break.

And the victors kept going after that with Emily Corbet scoring a brilliant goal as they ran out convincing winners.

They will now face Louth in the Leinster final where they will be hoping to avenge their opening round defeat.