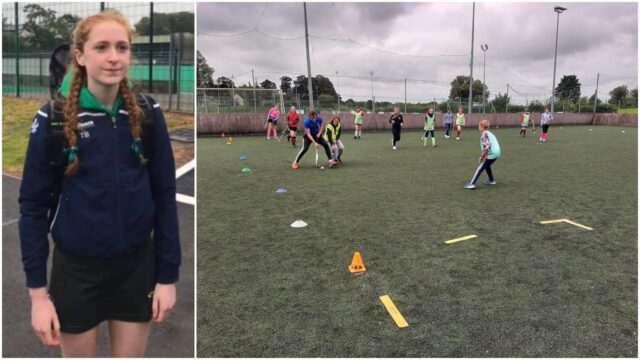 A Laois hockey player has been selected for Leinster in their upcoming Women’s National Development U-23/21 competition.

Leinster are limited to six U-21 players in each match against other provinces this weekend in Abbotstown.

Tory Byrne from Portlaoise, a member of Abbeyleix Junior hockey club, is one of the six players selected and the only player outside of Dublin.

Tory won West Leinster league play-offs with Abbeyleix on two occasions at U-16 level and just missed out on cup success with a 3–2 loss to Wexford in semi final in March 2020 – the last match played since disruption in underage hockey due to pandemic.

Tory has also won numerous honours with Villiers Secondary School in Limerick as well as being part of South East Interprovincial squads over last three years.

Tory is the latest in a growing list of Abbeyleix players including Daniel Brain, Rachel Fitzpatrick, Emily Brain, Penny Conroy and Molly Finlay who have been involved with provincial and development squads.

A number of players have also gone on to play with Portlaoise ladies.

Johnny Walsh, chairman of Abbeyleix Club, was delighted for Tory.

He said: “It is a great honour for Tory and for Abbeyleix club and its also an exciting in time for Hockey in Laois.”

While Summer is usually the closed season, there has been a lot of activity in promoting hockey as a real option for anyone looking to get involved in country’s fastest growing sport.

Abbeyleix ran a very successful Summer Camp recently with over 50 participants, led by club’s own coaches, and ably assisted by 13 young leaders fresh from achieving their Young Leader award from Hockey Ireland.

Laois Sports Partnership have just been allocated €27,000 towards equipment for Laois national schools from Sports Capital and Equipment Grant scheme.

While Leinster Hockey were also allocated €17,000 towards developing hockey in Leinster.

Abbeyleix and Portlaoise clubs, Laois Hockey and Dunamase Secondary will work with LSP and Leinster Hockey in rolling out this development.

While the Irish women’s teams’ success at World Cup and Olympic qualifications have given a great boost to hockey at National level, growth has been slower locally, due mainly to lack of facilities with no full-sized hockey pitch in Laois.

Over the last few years, both Abbeyleix and Portlaoise clubs have worked together in looking at options and subsequently formed Laois Hockey.

In 2020, a partnership agreement was signed between Dunamase Secondary School and Laois Hockey to create a Hockey pitch in conjunction with new school build in Augharney Portlaoise.

Earlier this year, an application for a regional hockey facility was made as part of a Sports Capital Grant Scheme.

Hopefully all the good news from summer will follow through to Autumn, when allocations are announced, and Laois hockey won’t be left behind.

Portlaoise ladies are competing in the Leinster league and hoping for promotion to Division 8. They will recommence training on Tuesday August 24 at 7.30pm on Abbeyleix astro pitch and new members are welcome.

Abbeyleix are catering for U-8s to U-16s and will resume on Sunday September 5 at 9.30am in Fr Breen Park.

They will compete in West Leinster and Leinster blitzes and leagues.

After all the uncertainty of the last 18 months, all involved in Laois Hockey are looking forward to new season and a return to competition.