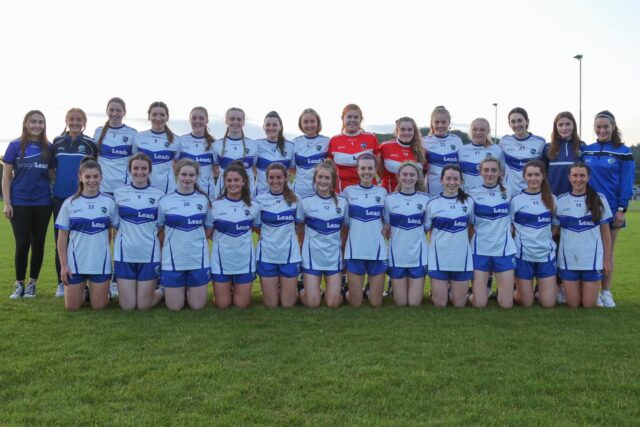 Laois have claimed the Leinster Ladies Minor Football ‘B’ title this evening following a hard-earned win over Louth in Abbotstown.

Laois had lost to Louth in the opening round of this competition a couple of weeks back but they learned the lessons from that loss and were full value for the win here.

Martina Phelan’s side got off to a dream start with a cracking goal from The Heath’s Aisling Fitzpatrick in the opening minute and though Louth responded with three points on the trot to be level by the seventh minute, a long-range Orla Hennessy free that bounced over the bar had Laois 1-1 to 0-3 up by the first water break.

Laois had been sluggish after that early goal but they were much better in the second quarter and two fabulous points from play from senior panellists Kelly O’Neill and Orla Hennessy had Laois three to the good.

Seona Leonard pulled one back for Louth but an O’Neill free and a fine effort from play from Fitzpatrick had Laois 1-5 to 0-4 up at half time.

Goalkeeper Aoibhe Brennan and full-back Sarah Tuohy had been impressive in keeping Louth at bay in that opening half while Ciara Crowley and Emily Corbet were unlucky not to see their hard work rewarded with scores.

If Laois got the first half off to an ideal start, the same wasn’t the case in the second with the incredibly harsh sin-binning of Orla Hennessy for the most innocuous of challenges.

Kelly O’Neill smashed home a penalty when Hennessy was off the field but Louth had a selection of goal chances, including one that hit the crossbar, before Abi Keenan found the net.

They also added a couple of points but with an O’Neill free and a fine score from Grainne Lalor, Laois were 2-7 to 1-7 ahead by the second water break and by the time Hennessy got back on the field.

Hennessy was excellent on her return to the action and she linked up with Crowley to set up Corbet for a brilliant goal in the 54th minute.

And they ended the game as a contest three minutes later when Anna Lalor set up Crowley for Laois’s fourth goal.

Captain Georgina Donovan from Graiguecullen accepted the trophy afterwards amid scenes of great joy while her club mate Kelly O’Neill was given the official player of the match award.