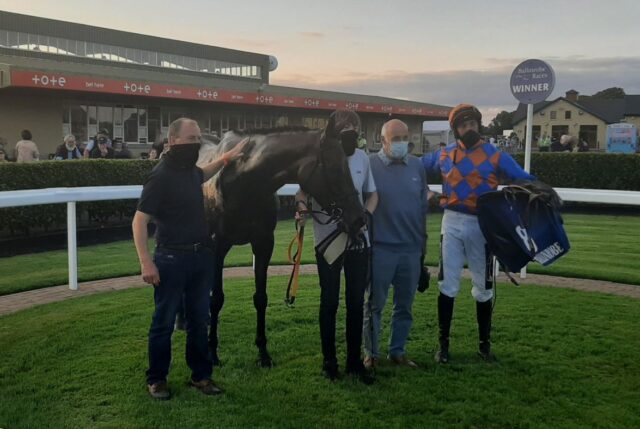 The National Hunt season is beginning to kick into gear and a Laois trainer enjoyed success in Ballinrobe on Monday.

The Dabbler, at odds of 2/1 and ridden by Eoin Walsh, won the Ballinrobe Water Towers Beginners Steeplechase to claim the €6,600 first prize.

The horse, owned by Michael Heery, is trained by Mountrath’s Liam Cusack and this was his third winner of the season.

Speaking to IrishRacing.com after the race, Cusack was thrilled.

Liam said: “He’s been knocking on the door and run some smashing races. He was a bit unlucky here in the Mayo National and had a bit of a look when he hit the front.

“They did a fabulous job here with the ground. There is a lovely cushion and it’s as level as a carpet. We could have done with it being a bit slower and hopefully he’ll be ok.

“When you get an opportunity like that for horses rated 116 or less you have to take it.

“He’s a grand horse to have and it’s great to get his head in front. The owner Michael Heery bred him and he’s been a good client of mine for years. It’s lovely to get a winner for him.

“All being well he’ll be fine for some of those staying chases into the winter.”