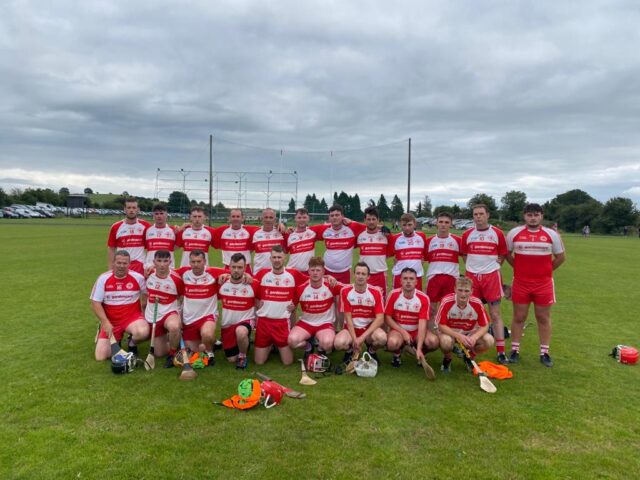 Trumera enjoyed a comprehensive victory over Mountrath in their opening group game of the Intermediate championship tonight.

Goals from Cathal Brophy and Conor Madden in the first half saw Trumera take the lead and they never looked back after that.

Mountrath’s discipline let them down too as Jake Walsh, Matthew Rice and Paddy Williams all saw red over the course of the evening.

The visitors raced into a five point lead in the opening eight minutes of the game through Jake Walsh, Paddy Williams, Gavin Sydes, Jimmy Hyland and Michael Meade.

But Trumera got themselves back into the game with a goal through Cathal Brophy.

Rhys Murphy, who dominated the midfield battle throughout the game, won the ball and played it to Brophy who skipped past two Mountrath defenders and chipped it over Brian Russell in goals into the back of the net.

The teams traded points as Adam Kirwan and Jake Walsh converted a brace of frees each to leave two points separating the sides at the water break – 0-8 to 1-3.

After the interval Trumera scored four points in a row to put them ahead for the first time in the game.

And with five minutes remaining in the half Paddy Hosey was fouled outside the fourteen metre line. Conor Madden stepped up to take the free and he drove the ball low into the corner of the net.

Mountrath’s Jake Walsh was sent to the line for an off the ball incident and things got even worse for them by the interval.

On the stroke of half time, Conor Madden scored Trumera’s third goal of the game to leave them 3-9 to 0-11 ahead.

Niall Sinnott got the second half underway with a free before Gavin Sydes replied with a brace of points for the 14 men.

But Cathal Brophy and Adam Kirwan soon hit back with points of their own to put nine points between them.

Kirwan then followed up his point with a goal as he drove the ball into the corner of the net.

Two minutes later, Mountrath were reduced to 13 men when Matthew Rice recklessly pulled on Paddy Hosey which gave referee JJ Gorman no choice but to brandish a second red card.

The sides traded frees through Sydes and Kirwan before the water break as Trumera led 4-14 to 0-14.

But five minutes after the restart Mountrath received another red card as Paddy Williams was sent off following another off the ball incident.

The players that were left on the field for Mountrath never gave in and they continued to point in the last ten minutes through Sydes (two frees), Michael O’Brien, James Fahy and Killian Kirwan.

But Adam Kirwan’s accuracy in front of goal saw Trumera see the game out well to clinch their first victory in the group.

Trumera face Mountmellick in Round 2 where a win will almost guarantee their semi final place while Mountrath must defeat The Harps in their next game to have any chance.