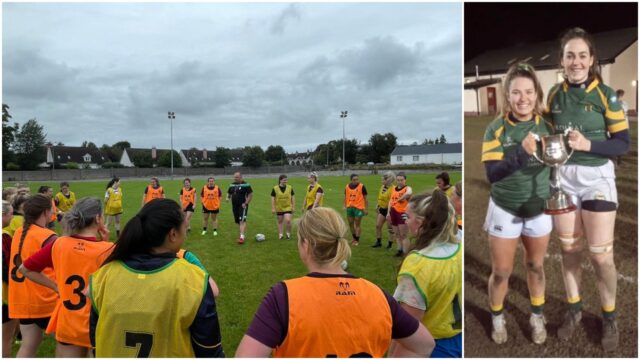 Women’s Rugby League is a sport that is very much in its infancy here – but a young Laois player is already making waves.

Anna O’Neill, who hails from Stradbally, has been selected on the first ever Ireland squad.

Back in March, Rugby League Ireland launched its first ever Women’s Championship which saw four clubs compete across Ireland to become the inaugural All Ireland Champions.

Head Coach John Whalley, who is Wigan Ladies assistant coach, was appointed as the first ever Ireland Women’s Head Coach.

He selected a squad of 50 players – 25 of whom are based in England with the other half coming from Irish clubs.

Stradbally’s O’Neill plays for Carlow side Barrowcudas as a hooker.

Anna’s Rugby Union career began in Portlaoise RFC and saw her go on to play with Carlow and Railway.

She switched codes over the summer with a move to Barrowcudas and after successfully trialing, has now been named here.

From the panel of 50, this will be whittled down to match day squads with Ireland’s first game scheduled for October before they intend to take part in the European Championships next year.

There are a few subtle differences between Rugby League and Rugby Union – the latter being more commonly played around here.

Rugby League is 13-aside while there are no line-outs, rucks or mauls.

There is also a six-tackle rule – similar to the ‘downs’ rule of American Football – where a team must either score or kick the ball on the sixth play or face being forced to turn over the ball.

In Rugby League, a try is worth four points and a conversion worth two while a drop-goal is only worth one point. A penalty is worth two points.

Speaking on the historic squad announcement, Chairman Jim Reynolds said: “Personally I could not be more delighted with our progress in building a Women’s Rugby League game here in Ireland.

“And to have made such fast and significant progress in building a formidable squad for the International team is testament to the great management and coaching team.

He said: “It has been a great initial few months, myself and my coaching staff have seen a lot of talent and it has been very difficult to narrow it down to a 50-player squad.

“We are delighted with the progression of the International set up even in these early stages and I look forward to carrying the team forward now and preparing for some International games.”