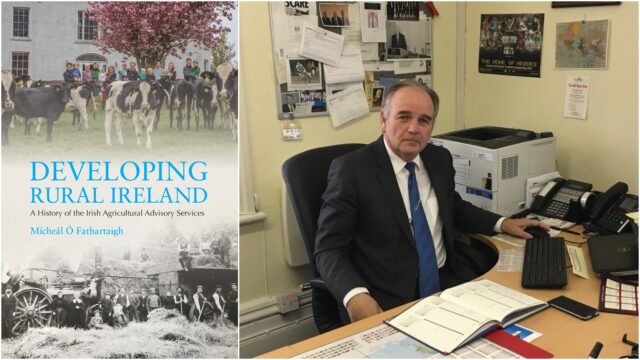 The history of rural Ireland and the history of the country are deeply intertwined – and that was very evident this week at the virtual launch of a new book look at the role of the Irish agricultural advisory service over the years.

The author of the book  – Developing Rural Ireland, A History of the Irish Agricultural Advisory Services – is historian Mícheál Ó Fathartaigh but the chairman of the working group that drove the project is Larry O’Loughlin from Rosenallis, a high-ranking Teagasc employee for almost 40 years.

The first meeting of the group took place in October 2017 and it total it comprised over 30 months. In all the book extends to over 200,000 words and 200 photos.

The launch was attended by Teagasc’s director Professor Gerry Boyle (who is due to retire after a distinguished career in the coming weeks) as well as Brendan Gleeson, the General Secretary at the Department of Agriculture.

The book covers 121 years of the advisory service, documenting some of the innovations over the years and the impact of significant historical moments on agriculture – including the War of Independence, the World Wars, Ireland’s entry into the EEC and the various policies of different governments.

“The book addresses so many themes,” said Professor Gerry Boyle in his address, referencing various structural changes, “the evolution and number of advisors that dealt with farm enterprises”, the breaking up of the old County Committees of Agriculture and the establishment of Teagasc itself in 1988.

“Throughout history, the service stood up to the plate,” added Professor Boyle. “It took on the burden of public service even when resources were limited.

“What the book powerfully shows is that on so many occasions throughout the history of the service, if it hadn’t existed, it would have had to be invented.”

The ‘Winter Classes’, the role of women in agriculture, the establishment of ACOT advisory services, the advent of milk quotas (and their abolishment years later) are also covered.

“Larry and his steering group deserve great credit,” added Gerry Boyle. “They exhibited a dedication and passion for public service in the agricultural industry in the national interest.”

“First established in the early 1900s, they are today operated as a public service by Teagasc, Ireland’s Agriculture and Food Development Authority,” says the book’s promotional blurb.

“With their establishment, agricultural instructors, trained to the highest international standards, were despatched to every community in rural Ireland.

“Their brief was to work with farmers, helping them to improve their farm enterprises and, in so doing, to develop rural Ireland.

“This gradually bore fruit, as each succeeding generation of agricultural advisors and farmers co-operated to adopt the most modern agricultural approaches.

“This book tells their story. In addition, by relating it to the wider national and international historical archives of the twentieth century, it makes it fully accessible both to those who know rural Ireland and to those who do not.”

The book is published by Wordwell and is available now to buy for €30.