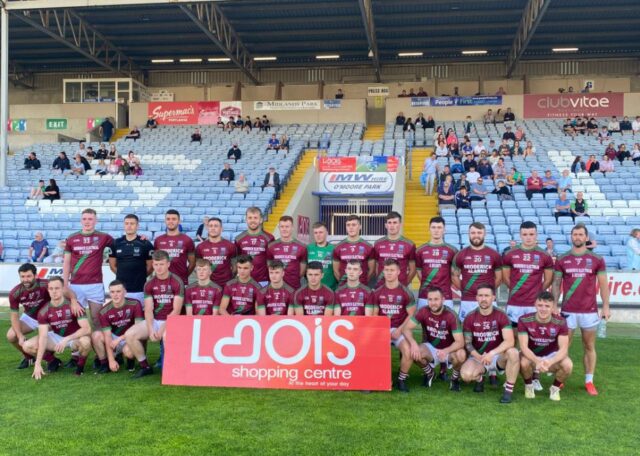 Portarlington’s defence of the Laois SFC is off to a winning start after they edged by Ballyfin in O’Moore Park this afternoon.

The first quarter of this game started in a similar fashion to how the semi final did a few weeks ago.

Ballyfin were competitive and actually took the lead twice but Portarlington took over in defence and took control of the game.

But it all changed in the period before and after half time as Ballyfin kicked seven out of eight points to actually take the lead after 35 minutes.

But Port were able to call on their experience as Jake Foster finished with some fine points to claim a hard fought win.

Sean Moore and James Finn were on the scoreboard early for Ballyfin with David Murphy and Jake Foster replying.

Adam Ryan edged Port ahead 0-3 to 0-2 at the water break and it looked like they would kick on to win when Colm Murphy set up Adam Ryan for a goal and Murphy kicked a second point.

But Ballyfin ended their scoring drought after 25 minutes when Sean Moore landed a mark.

He kicked two more frees – either side of a Cathal Bennett black card – and then Louis Duff landed a mark to make it a one point game.

However, Ballyfin started the second half like a train as James Moore caressed one over before younger brother Sean hit another brace to give his side the lead.

Jake Foster responded for Portarlington to level matters just as Cathal Bennett returned from his black card to make it 15 v 15 again.

A fortuitous Adam Ryan point regained the lead for Port after 40 minutes but Moore’s seventh point tied the game once more.

But we had real drama on the water break. James Finn looked certain to score a goal when his shot beat Sean Mooney but Cathal Bennett somehow got back to block the ball off the line.

Port instantly countered and Sean Byrne curled one over to leave it 1-8 to 0-10 at the second water break.

But Ballyfin refused to go away and Sean Moore’s eight point tied the game once again after 50 minutes.

Back came Port though as Sean Byrne and Jake Foster scored in the following two minutes to restore their two point lead.

The gap remained so as we entered the closing stages with Moore and Foster swapping scores.

Ballyfin needed a goal but instead it was Foster who kicked the final point to claim a three point win.