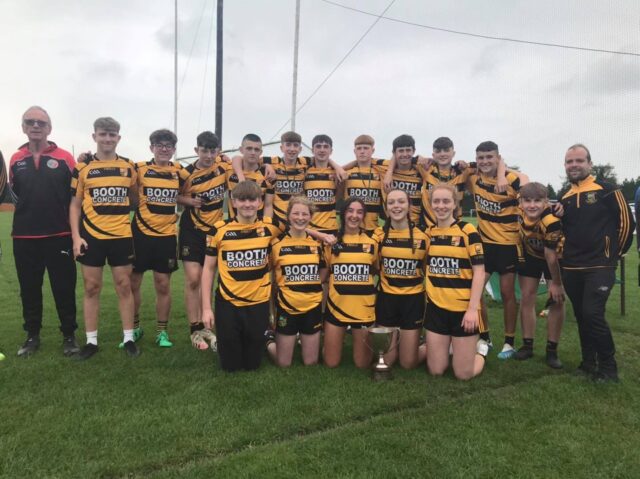 It was double delight for The Heath Rounders teams as they turned in two stunning displays to claim the Minor men and Minor Mixed All-Ireland titles overcoming neighbours Emo.

Clonad GAA club was the setting on Saturday morning where these two sides met yet again with The Heath overpowering Emo in the men – with the mixed producing an epic final with The Heath coming out on top in a nail-biting finish.

First up was the eagerly anticipated Minor men’s match – on paper it would suggest that these two sides were well matched but a fast start from The Heath proved vital which guided them to the win.

The Heath came out of the traps fast by running in 11 scores which rattled the Emo side and they never really recovered from then on in.

In the next two innings the fielders came out on top with some great bowling from The Heath’s Aaron Keane along with John MacNamara leading the way for The Heath.

There were some great catches on the Emo side from Jack Lalor and Padraig Langford.

The score going into the 4th inning was 11-5 in favour of The Heath where they found another gear with their batting with Sean Kirby and Tadgh Whelan guiding them towards the title.

Next up was the minor mixed final and what an unbelievable final we were treated to.

The Heath got off to another great start by running in 5 scores, but Emo didn’t let it affect them on this occasion and played their way into the game.

Some great play by Emo’s Grainne Keogh and Anna Hanlon on 1st base led the Emo charge by getting The Heath out straight away.

One of the contenders for catches of the day came soon after from The Heath’s Sarah Gorman after catching off a rocket of a shot by Brochan Reilly.

The game was now level at 9 a piece going into the last inning, and it provided so much drama. The Heath ran in 3 scores leaving Emo needing three to draw and 4 to win.

Emo closed within one of The Heath with bases loaded with two people out and it looked like we were going into an extra innings until PJ Larkin pulled off a remarkable catch to seal the mixed title for The Heath.