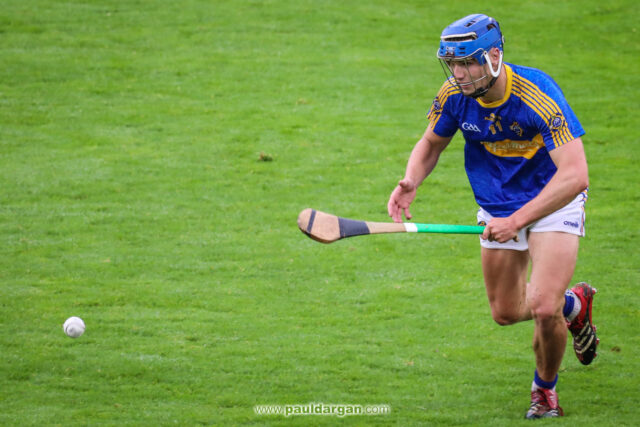 Clough-Ballacolla are county champions for a very good reason and they showed their class with a comfortable win over Rosenallis in O’Moore Park this afternoon.

This was a game that was over at the first water break as Clough-Ballacolla led 1-8 to 0-3 and it meandered along from there to the final whistle without ever the slightest doubt as to who was going to win.

Clough-Ballacolla are safely through to the knockout stages and will play Castletown in two weeks time to decide who will top the group and go into the semi-final.

Rosenallis, after being a breath of fresh air in the championship last year, are now zero from two and will play The Harps in a game that will send the loser to a relegation final and the winner to a quarter-final.

Having missed their opening game because of injury, Paddy Keating put Rosenallis into an early lead with a free but it was a false dawn.

Jordan Walshe and Diarmuid Conway quickly replied and though Brian Fitzpatrick levelled things up with a free, Ballacolla hit 1-3 in quick succession, the goal from Robbie Phelan going in after a deflection off John Maher. Walshe, Picky Maher and Willie Dunphy all added points.

Keating pulled back a free but Aidan Corby, Maher (free) and Walshe all added points and Ballacolla were eight up at the first water break.

And the life was really taken out of it shortly after play resumed. Cathal Dunne made a great save on Donagh Callally when Rosenallis could have done with a goal and from the resulting attack, Ballacolla launched the ball into the square, Stephen Kelly attempted to clear the danger but the ball broke to Willie Dunphy and he finished to the net from close range.

Instead of five had Dunne not pulled off his save, there was now 11 in it and the game was over as a contest.

Fitzpatrick and Keating replied with frees for Rosenallis but Aidan Corby and Maher (free) cancelled those out before David Dooley – making his first senior hurling appearance after featuring with the Leinster U-19 rugby team in recent weeks – fired over Rosenallis’s first effort from play late in the half.

It was 2-10 to 0-6 at the break and only a massive Clough-Ballacolla collapse or a serious upturn in Rosenallis’s fortunes was going to see this one change outcome.

There was never any fear. Picky Maher got the first four points of the second half and though Rosenallis battled gamely on, it was 3-18 to 0-10 at the water break, with Dunphy getting his second goal just before the play stopped.

Paddy Keating got a good goal for Rosenallis in the final quarter but Clough-Ballacolla continued to dominate with Willie Dunphy completeing his hat-trick and young Cillian Dunne also hitting the net and in the end Ballacolla had a massive 29 points to spare.

This article intially credited Stephen Bergin with two of Clough-Ballacolla’s goal. We’re happy to clarify that those goals were scored by Willie Dunphy. Sorry Willie!!