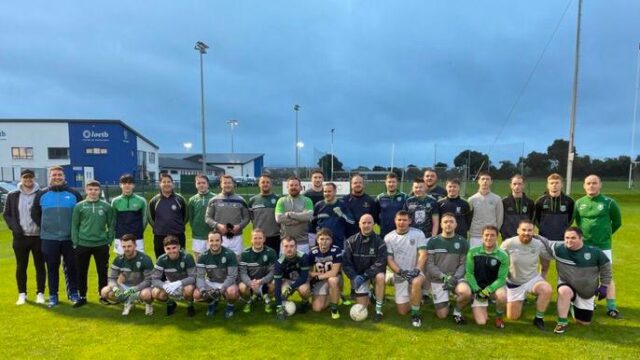 Stradbally are through to this year’s Junior ‘B’ football final following this evening’s comfortable semi-final win over Mountmellick in the Laois GAA Centre of Excellence.

Both sides had played two group games to get this far – but the last of those was nearly four weeks ago and with the senior and intermediate championship having started since, both were duly down a number of players that had seen action in the earlier rounds.

And it was Stradbally that coped with those losses better.

With a number of former senior players in their ranks, many with championship medals to their names, they were too strong for Mountmellick.

Colin Beale was the star man for Stradbally, scoring 1-2 and getting on a lot of ball, while Darragh Mulhall got two goals, palming both to the net.

Stradbally were well on top throughout with Mountmellick’s goal only coming in injury time.

Stradbally now go on to play Slieve Bloom in the final, which is pencilled in for this coming Wednesday, though has yet to be confirmed.