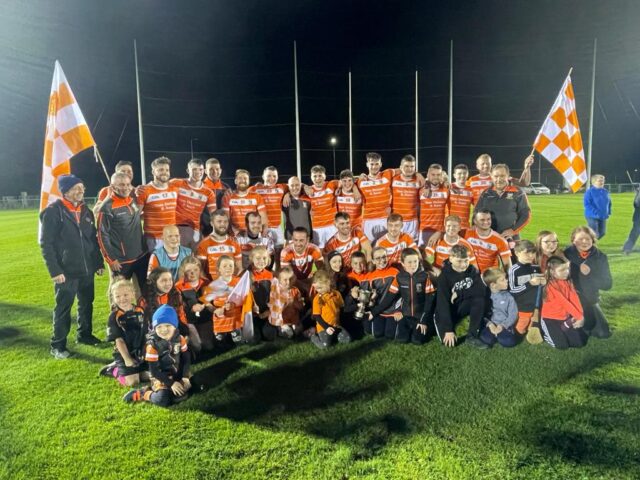 Slieve Bloom are Laois Junior ‘B’ Football champions for 2021 following a four point win over Stradbally in the Centre of Excellence tonight.

Just as he was in the Premier IHC against Ballyfin last week, Ben Conroy was Slieve Bloom’s main scorer as he finished the game with 2-4.

He had help on this occasion though – chiefly through the lively Evan Power and the pair were probably the difference in the end.

Stradbally had played the semi final against Mountmellick 48 hours previous but they showed no signs of fatigue and pushed the eventual winners all the way to the end.

The sides couldn’t be split in the opening quarter as Stradbally went ahead through senior manager Greg Ramsbottom and Colin Beale before Power and Conroy drew Slieve Bloom level by the water break.

Ramsbottom’s second regained the lead for Stradbally on the resumption but Slieve Bloom took control and built up a five point advantage by half time.

A brace from Evan Power and another from Robbie Burke soon followed to put Slieve Bloom 1-5 to 0-3 ahead at half time.

Ciaran Conroy made it a six point game on the resumption but Stradbally went to their bench at this stage and came roaring back.

A swift move that started in their defence by keeper Jack Larkin saw Richard Carolan and Greg Ramsbottom involved before Darragh Mulhall fisted the ball to the net from close range.

Colin Beale added a point and the margin was back to two points but Stradbally were reduced to 14 men after 37 minutes when Noel Delaney was black carded for a foul on Ben Conroy.

The latter added a free and then went on another rampaging run that resulted in him smashing home his second goal of the night.

That left it 2-7 to 1-4 at the water break but Stradbally refused to give in. A brace from substitute Derek Beale and another from fellow sub John Donoghue brought them right back into the game as we headed for full time.

But a free from Ben Conroy gave Slieve Bloom the comfort they needed as they held on for a four point win.