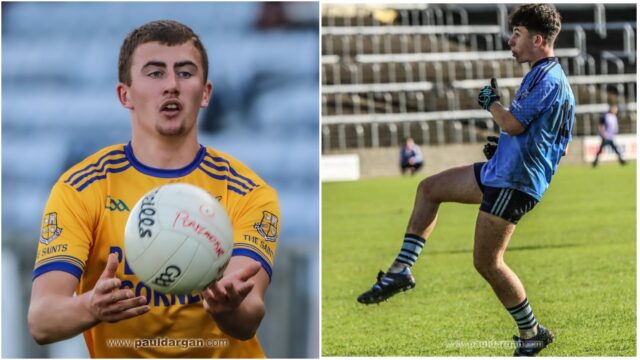 There’s never been much between St Joseph’s and Ballyroan-Abbey over the years with their last two meetings seeing both record a one-point win each.

And it followed a similar trend in O’Moore Park this afternoon with Ballyroan edging it after extra time to book their quarter-final place.

The first quarter was flat enough with Joseph’s kicking six wides but leading at the water break thanks to points from Brian Daly and wing-back Aidan Brennan.

Ballyroan’s only score was a free from Brian Whelan.

The second half was uneventful for long spells too as the wide count increased on both sides (both hitting seven each in the half) though a Charlie Whelan point from play levelled things up in the 15th minute.

There wasn’t another score until the 29th minute when a driving run from Marty Scully set up Padraig McMahon and though his palmed effort was well stopped by Aaron Cooney in the St Joseph’s goal, Ballyroan got the ball over the line in the ensuing scramble. Cathal Doyle was the one credited with it.

From the next attack Ciaran Byrne punched over a point and Ballyroan-Abbey led 1-3 to 0-2 at the break.

In a low-scoring game, with both sides being defensive, would it be enough?

Joseph’s made a couple of switches at half time and one of them, Jason Campion, made an instant impression.

He kicked a point, hit the post with another shot and then was fouled for a free that Oisin Hooney converted and led to the black carding of Marty Scully.

James Kelly then pointed from play to get the difference back to one though it was soon cancelled out by a Brian Whelan free even if Ballyroan missed a good goal chance when Padraig McMahon was denied by Cooney.

Campion then took a good mark and pointed but it was cancelled out by a Brian Whelan effort from play just as Scully returned after his ten minutes in the sin bin.

There wasn’t a huge amount of play from there to the end but a James Kelly free in the first minute of injury time levelled things up.

The first half of extra time saw two goals, the first within a minute when big Cathal Doyle got a fist to a high ball in from Padraig McMahon who was brought back on.

Joseph’s levelled up soon after with their best move of the game, Michael Keogh rifling home after a great run and pass from Matthew Campion.

But Ballyroan were back in the lead by the half time break thanks to a nice score from Davin McEvoy.

A second McEvoy point nudged them two ahead and Joseph’s – with lads going down with cramp left, right and centre – couldn’t come back from there.

Jamie Kelly did pull one back but it wasn’t enough.