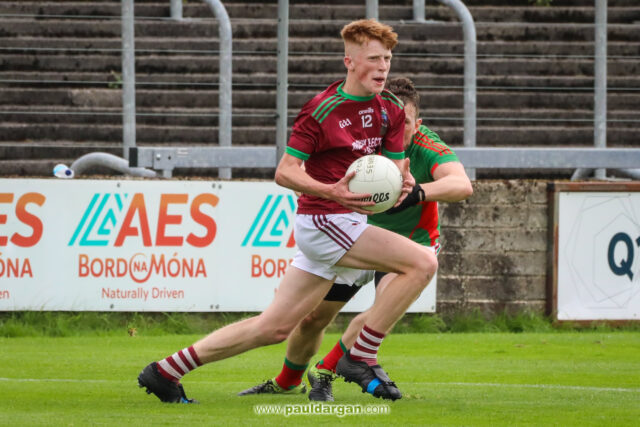 The Laois SFC action continues at pace today with four more games down for decision in two double headers in O’Moore Park.

The winners of the four games will go straight through to the quarter-finals with the losers reverting to Round 3 to play one of Clonaslee-St Manman’s, Portlaoise, Killeshin or Emo.

Ballylinan, Ballyfin, Arles-Killeen and The Heath will be in the relegation playoffs and draws for both Round 3, the relegation semi-finals and the intermediate quarter-finals will be made in O’Moore Park this evening.

Champions Portarlington will be looking to be the first time into the quarter-finals when they take on Courtwood which is a local battle of sorts in the first game today in O’Moore Park.

While the clubs don’t border each other, there would be a certain familiarity. A number of the Courtwood players would have attended secondary school in Coláiste Íosagáin and for a number of years the two dominant clubs at underage were Portarlington and St Paul’s (Courtwood-Emo).

It makes for a novel fixture and a first senior championship meeting between the clubs since the 1990s.

Portarlington scraped by Ballyfin in the opening round, which came just three weeks after their 2020 county final success, but they could welcome back Robbie Pigott, Paddy O’Sullivan, Scott Osbourne and Ronan Coffey today.

Courtwood were the story of the opening round with their famous win over Portlaoise and they have a selection of fine footballers throughout the team.

But while Port don’t seem to be operating to the same level as they were in the latter stages of the 2020 championship, they should have a wide enough range of scorers to win this one.

The second game of the day is the meeting of St Joseph’s and Ballyroan-Abbey.

It’s the third year in a row that the clubs will meet and the previous clashes suggest a tight game. In 2019 St Joseph’s won by a point, last year Ballyroan-Abbey had the same margin.

Having won two of the last three minor titles, Ballyroan-Abbey have a fine young team under Padraig Clancy though still retain the experience of the likes of Padraig McMahon and MJ Tierney as well as county player Marty Scully.

They got the better of Killeshin in the opening round while St Joseph’s were too strong for Clonaslee-St Manman’s.

Ballyroan-Abbey are a fancied side locally in Laois but the bookies have St Joseph’s as favourites.

As always you’d expect their defence to be solid defence and in what will likely be a low-scoring game, they may be able to do enough to win.

Another novel senior championship pairing and a game that should be full of both running and scores, if their first outings are anything to go by.

The Killenard men, who are under former Ballyroan-Abbey player and Laois selector Eoin Kearns, looked very impressive against Emo. Matthew Finlay and Mark Barry were excellent in attack while Shane Nerney, Peter O’Leary, Robbie Kehoe and Fionn Holland were all brilliant defensively.

While experienced campaigners like Conor Meredith and Micheal Finlay didn’t feature, they have introduced some impressive young players like Ben Coen and the Lennons.

As usual, Rosenallis are battling on two fronts and for most of their players this will be their fourth weekend in a row to be in championship action. They have lost their two hurling games to date and last Sunday’s 29-point loss to Clough-Ballacolla will have particularly hurt.

Manager Paddy Dunne, though, has been getting a good tune out of them and after guiding the club to junior and intermediate honours, he’s now got a first ever senior win (discounting relegation) under his belt.

A first quarter-final appearance might be too much and O’Dempsey’s have to be fancied.

Old rivals Graiguecullen and Stradbally meet in the championship this evening for the first time since 2011 with a quarter-final place up for grabs for the winners.

Stradbally come into this game on the back of their first opening round win since 2016 after they finished strongly to record a big 14-point win over Arles-Killeen.

Graigue, for their part, were comfortable winners over The Heath as they bounced back from their 2020 county final loss to Port only three weeks earlier.

In Greg Ramsbottom’s second year as manager, Stradbally seem to be building nicely and they’ll have welcomed that first round win after two narrow losses in 2020.

The introduction of youngsters like Conor Goode, Darragh Carolan, Eamon Delaney and Ciaran O’Neill have given them a new lease of life while they have county material in Colm Begley and Eoin Buggie and Garry Comerford is committed too this year and is a serious addition.

Graigue are favourites and while it should be tight, Graigue’s good defence might be able to give them the platform to build a winning performance.