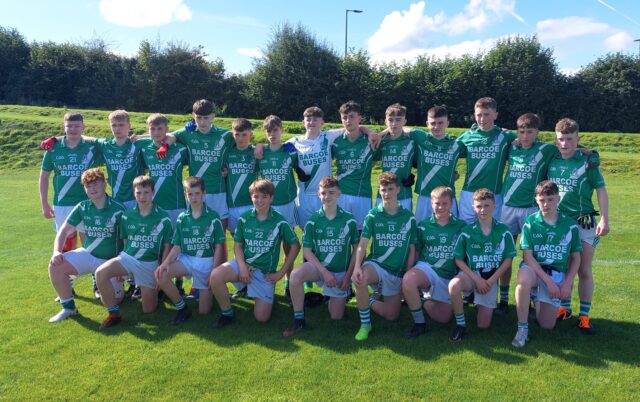 Blake Rice’s stunning tally of 3-3 led Killeshin to a fine victory over St Paul’s in the U-15 ‘B’ Football Final.

Killeshin started the better of the two sides from the off as Rice pointed twice to give them an early lead.

Jack Brennan converted a great 45 before, on the ninth minute, Killeshin had their first goal.

Riogan Doran danced through the St Paul’s defence before unleashing his shot between Gavin Jordan’s legs.

St Paul’s badly needed to reply and they did just that. Monty Balfe converted from distance to leave the scores 1-3 to 0-1 at the first water break.

Killeshin were once again on top at the resumption of play. St Paul’s really struggled to win their own kick out and Gavin Jordan needed to pull off a great save from Doran to keep St Pauls in it.

In the last five minutes of the half both sides rattled off scores. St Paul’s Captain Liam Ward finished off a great counter attack by pointing before Killeshin got in for their second goal.

Evan English and Jack Milton combined well to set up Rice who slotted the ball home.

However, St Paul’s quite literally went back up the field and great work from Dan Boland and Roy Lawlor set up Ward who blasted the ball home.

A minute later and Dylan Fenlon Carroll beat two men and hand passed the ball across to Roy Lawlor who doubled on the ball first time and sent the ball into the back of the net.

Unfortunately for St Paul’s, they would not score for the next 24 minutes.

Evan English pointed after 25 seconds to extend the lead and there was more to come. Rice smashed home his second goal from a tight angle on the 33rd minute.

His hat trick then came a minute later as he won a St Paul’s kick out, ran through on goal and fired the ball into the top corner.

Doran and English kept the scoreboard ticking over for Killeshin which left the scores at 4-9 to 2-3 at the second water break.

To St Paul’s credit, they created some opportunities in the final quarter but they could not find a way through.

The game began to get very stop start in the final few minutes and this was exacerbated by a late red card for Killeshin’s Pauric Moran.

Liam Ward kicked a point late on for St Pauls but Killeshin ultimately ran out comfortable eleven point winners in the end.