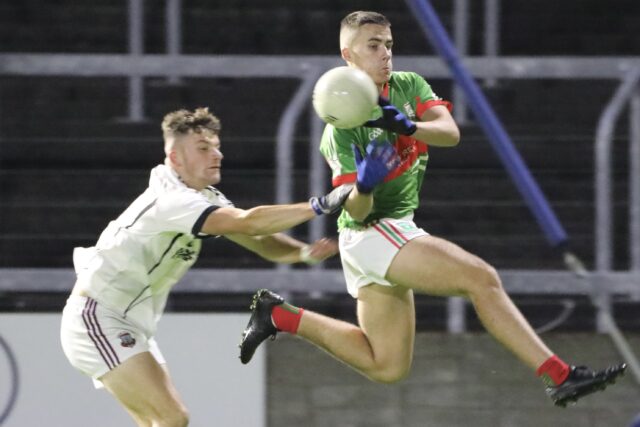 The Laois minor football final has a tradition of producing entertaining games over the years and it has also thrown up some unusual pairings.

And it was a right good game for long spells before Graigue took control in the second half to claim their 13th title in the grade and their first since Brian Byrne captained them to glory in 2015.

Na Fianna Og had plenty of play in the opening half and could well have had at least three goals, the first chance coming with just two minutes on the clock when Jonah Kelly’s powerful shot was parried over by Cody Tucker.

A fabulous point after a strong run from the very impressive Aodhan Lowry put Na Fianna Og back in the lead and then Jamie Conway popped one over off his left to double the lead.

Byrne and Jamie Murphy responded for Graigue to tie things up again though the last score of the quarter went to Lowry after he won a throw up and pointed. That throw up had initially been signalled a penalty by referee Brendan McCann following a John O’Shea block on Conway.

That left Na Fianna Og 0-5 to 0-4 up at the water break and Lowry got an almost identical point on the resumption after he won another throw up to point again. Jonah Kelly pointed either side of a well-struck Conor Harte ’45 but the last score of the half went to Graigue when Harte pointed from play. At the break, Na Fianna Og led 0-8 to 0-6.

Graigue got a dream start to the second half when Scott Roycroft goaled spectacularly with a soccer-style shot and with his confidence up he then pointed from play and added a free. By the 37th minute Graigue had a 1-8 to 0-8 lead. Na Fianna Og needed a goal and though they had one disallowed for square ball, the chances didn’t come as easy or as often as they had in the first

The next goal was a crucial one and it essentially settled the game in Graigue’s favour: a high ball from Jamie Murphy ending up in the net. At the water break they led 2-9 to 0-9.

Na Fianna Og battled on in the final quarter but Graigue were on the home straight at this stage.

A Conor Harte point was greeted by a thunderous roar from their supporters but a Peter Grogan penalty after Darragh Kealy was fouled and Sean McGrath picked up a second yellow card meant it was a somewhat nervous closing spell.

But Graigue had enough on the board and two late Roycroft points ensured it was their night.