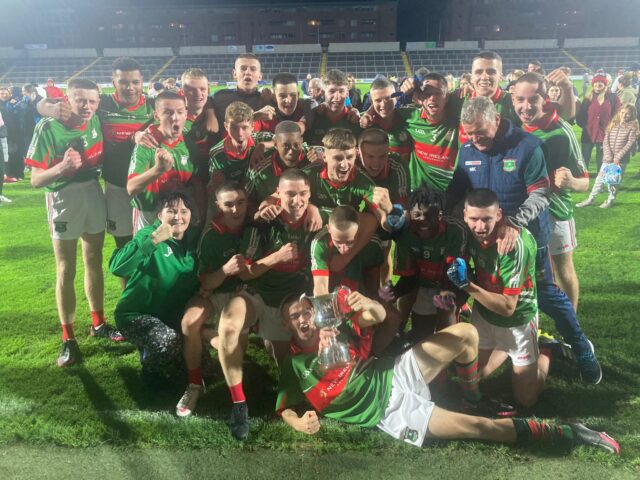 Graiguecullen turned in a powerful second-half performance to win the Laois MFC ‘A’ title in O’Moore Park on Wednesday night.

They trailed 0-8 to 0-6 at half time, but restricted Na Fianna Og to just 1-1 in the second half and kept them scoreless from play as they pushed on to win their first minor title since 2015.

Here we pick out some of the game’s main Talking Points.

Aodhan Lowry, Jonah Kelly, Jamie Conway and Kodi Dunne all got through a huge amount of work for Na Fianna Og but Graigue had an amount of impressive performers too.

Aaron Dorgan, John O’Shea, Jack Byrne and Conor Harte were all very good but the star man was Scott Roycroft, who hit 1-4 in a brilliant second-half showing.

Though quiet in the opening half, he burst into life after half time, with his goal coming after a blistering run cut through the Na Fianna Og defence.

He may have lost possession but he brilliantly hit it on the volley and fired past Conor Browne. Having represented Carlow-Kilkenny at national league level, his soccer skills certainly came to the fore there.

That score put Graigue ahead for the first time and Roycroft added four further points in the second half. Definitely one to watch.

‘Graigue are on the up’

There was joyous scenes at the final whistle as Graiguecullen celebrated this county final success and their young players boisterously chanted ‘Graigue are on the up’.

Having lost the 2020 Senior and Junior ‘B’ finals in August, this was their latest shot at championship glory. And this team look like they have plenty of players that will go on to play senior for the club.

The half-forward line of Conor Harte, captain Jack Byrne and Scott Roycroft hit 1-10 between them and all look like they’ll step up in the coming seasons.

With 13 minor titles, Graigue sit behind Portlaoise on the roll of honour and continue to do all the right things to help them finally end the senior famine that stretches all the way back to 1965 at senior level.

For this group, they had tasted defeat at U-13 and U-15 level and after defeating Portlaoise in the minor semi-final this success is a particularly sweet one.

While Na Fianna Og were in an U-20 ‘B’ final a couple of years ago, this was their first ‘A’ final to appear in. At this age they are a combination of the two Arles clubs, Crettyard and Barrowhouse though at some grades Crettyard are out on their own.

They had only been beaten narrowly by Graigue in the U-15 semi-final two years ago and drew with them in the group stages of this minor championship.

It’s hard to think that any type of combined senior team is on the agenda but all clubs involved will welcome young players coming into their adult sides that have played at the highest underage level.

Na Fianna Og came in as outsiders but they played fine football in the opening half – and really should have been more than two points up.

They could have had at least two penalties while Cody Tucker made a couple of outstanding saves in the Graiguecullen goals.

Just before the first half water break, Na Fianna Og worked a great goal chance but Jamie Conway couldn’t get the space he needed to finish to the net and his shot was brilliantly blocked by John O’Shea. O’Shea appeared to subsequently handle the ball in the small square, leading referee Brendan McCann to initially signal a penalty. However, on consultation with his umpires he opted to throw up the ball.

Shortly before half time, Jonah Kelly cut inside the last man and was dragged down. A definite foul but a borderline case as to whether it was inside or outside the square. McCann said it was outside. Had any of those been a goal, it would have given Graigue a steeper hill to climb.

Na Fianna Og also had a goal disallowed for square ball early in the second half but McCann blew it instantly and was in the perfect place to spot it. Na Fianna Og needed it – but the chances dried up after that as Graigue pressed on.

A rule brought in in 2017 prohibits players U-17 playing adult GAA and creates a clear divide between underage and adult. It now means that players now have to be in their 18th year before they can play with their adult club.

While it makes fixture streamlining far easier, it’s understandably frustrating for clubs, particularly smaller ones with low numbers, not being able to call on those players.

Many of those on view in this game wouldn’t look out of place at adult level. The GAA are quite rightly keen to protect young players but we’d argue that there is a protection system in place already: the players’ parents and the clubs themselves. They generally know who is and isn’t up to lining out at adult level.

The semi-finals and final both provided good contests, as did the group with Graiguecullen, Na Fianna Og, St Joseph’s and Ballyroan-Abbey.

But this grade wasn’t without its problems. Current senior champions Portarlington requested to play in the ‘B’, which was turned down, and they duly didn’t field in any of their group games. Emo-Courtwood gave a couple of walkovers too, including the quarter-final.

It meant that Portlaoise played one group game, got two walkovers and then were beaten in the semi-final.

This isn’t pointing the finger of blame at anyone, but such a level of apathy isn’t good for Laois in general.