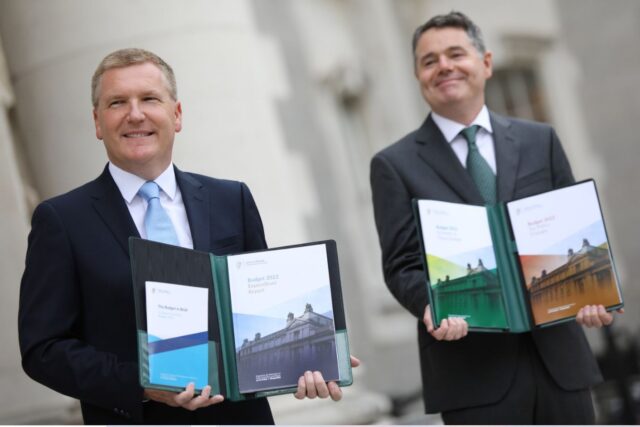 Minister for Finance Paschal Donohue and Minister for Public Expenditure Michael McGrath have announced details of Budget 2022 in the Dail this afternoon.

The proposed €4.7 billion package will see a split between €4.2 billion of expenditure measures and €0.5 billion of new tax measures.

Below, we will outline all the main measures and how they are going to impact all of us.

A €5 increase in main weekly welfare payments and State pension has been agreed.

Effective from midnight, weekly fuel allowance is to rise by €5 in a bid to help people with rising fuel costs.

While the Living Alone Allowance is to be increased by €3.

The Back-to-School Allowance is set to increase by €10 from June of next year while double payment of welfare allowances at Christmas was also announced.

The current Help-To-Buy Scheme will continue in 2022 but will be reviewed at the end of that.

In a bid to encourage the development of houses, a new 3% Zoned Land Tax will apply to land which is zoned suitable for residential development and is serviced, but has not been developed for housing.

Landlords allowed relief for pre-letting expenses for a further three years while €174 million has been allocated for supporting the direct delivery of over 4,000 affordable homes next year.

While €18 million has been allocated for the delivery of traveller accommodation.

The minimum wage is to rise 30 cent to €10.50 per hour while income tax deduction amounting to 30% of vouched expenses for heat, electricity and broadband incurred while working from home have been introduced.

€520 million of income tax reductions have been announded. These include increasing the standard rate band by €1,500 and increasing each of personal tax credit, employee tax credit and earned income credit by €50.

The reduced VAT rate of 9% for the hospitality sector will remain in place to the end of August next year.

Free GP care has been extended to children aged six and seven while the maximum amount someone will pay for approved prescribed medicine under the Drugs Repayment Scheme will be cut from €114 a month to €100.

Meanwhile, free contraception for women aged 17-25 is set to be introduced from next August.

€250 million is to be spent to address waiting lists in hospitals while €30 million will be allocated for the Department of Health to provide further supports for areas hard hit by the pandemic – palliative care, mental health and disability services.

Parent’s Benefit is to be extended by two weeks to seven weeks from July next year.

Children up to the age of 15 will be included in the universal payment under the National Childcare Scheme. It provides 50c per hour towards the cost of a Tusla-registered childcare place for a maximum of 45 hours per week

A new funding stream for up to 4,700 early years and childcare providers will be put in place from September 2022 onwards to support improvements in the quality of childcare provision.

Student grant for Third Level students will be increased by €200, qualifying income thresholds expanded by €1,000 and qualifying distance reduced from 45km to 30km. This is the first increase since 2012.

The €200 contribution fee for post-Leaving Certificate courses is to be abolished while 20,000 new further education and training places are to be created.

Changes to Vehicle Registration Tax ranging from 1% increase for vehicles that fall between bands 9-12 to 4% for those in bands 16-20 have been confirmed.

An additional 800 gardaí and 400 civilian staff are to be recruited.

A new Youth Travel Card will be introduced which will offer a 50% discount to those aged between 19 and 23 across the transport network.

A €25 million fund to establish a basic income scheme for artists has been set up while over €60 million has been allocated to extend the commercial rates waiver for quarter four targeted at the hospitality, arts and certain tourism related sectors.

The agriculture budget has seen a €32 million increase on 2021 Budget.

While the second phase of the soil sampling programme to go ahead in 2022.

The current Employment Wage Subsidy Scheme will remain in place, in a graduated format, until April 30.

New entrants will not be accepted after January 1 however.

The government has increased excise duty on a packet of 20 cigarettes rises by 50 cent – meaning the average packet now costs €15.

There were no changes on tax regarding alcohol.