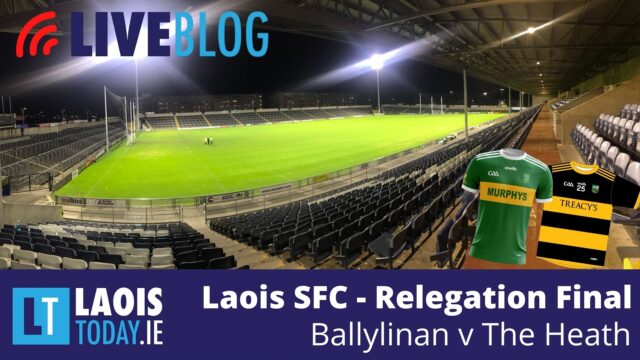 One of the most important games of the season takes place this evening in O’Moore Park with the meeting of Ballylinan and The Heath in Laois SFC Relegation final.

The loser of this game will be relegated to intermediate for the 2022 season, meaning the end of a long senior stay for one of these teams.

The Heath are one of Laois’s longest-serving senior clubs and have never been outside the top tier while Ballylinan are senior since winning the intermediate grade in 1973.

It’s not the first time The Heath have found themselves in this situation and they have been in the relegation final in 2007, 2012, 2016 and 2019 as well as relegation semi-finals on a couple of other occasions.

Ballylinan have avoided this stage of the championship for the most part though did end up in the relegation decider in 2015 when they narrowly got the better of O’Dempsey’s.

They have struggled for form this season and failed to win any of their five games in Division 1A of the league to be relegated.

They’ve since lost all three championship games – to Rosenallis, Clonaslee and Arles-Killeen.

The Heath, though in the lower Division 1B of the league, got through to the semi-final but haven’t carried that form into the championship and have lost to Graiguecullen, Emo and Ballyfin.

This evening’s game throws in at 7.30pm and we’ll have updates throughout.