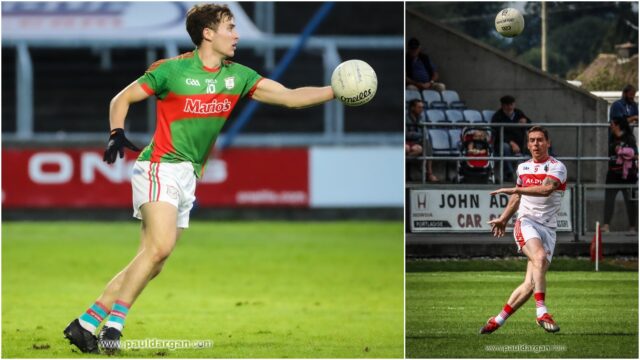 Emo and Graiguecullen met for the third season running in the Laois senior football championship this evening in O’Moore Park – but it was a case of third time lucky for Emo after a thrilling affair.

Having lost to the same opponents in the 2020 semi-final back in August, Emo turned in a massive performance here to turn the tables. They kept in touch throughout and a brilliant Paddy Hosey goal with seven minutes remaining turned the game in their favour.

They were able to hold out from there in a frantic finish.

On an emotional week for the Emo lads, following the tragic death of their clubmate and friend Conor Montague, they gave everything they had here and were duly rewarded.

Playing with the aid of the breeze in the opening half, they got the first two points from Nigel Murphy and Paddy Hosey and though the lively Ross Hennessy kicked two to level things up, Darren Strong had them 0-3 to 0-2 up at the first water break and it could have been more only for five wides in that opening quarter.

Conor Kelly pointed two frees within minutes of the restart to nudge Graigue into the lead for first time but a fantastic Nigel Murphy effort from play after a patient buildup levelled things up again.

A minute later Shane O’Neill put Graigue back into the lead but a Paul Lawlor free after Hosey was fouled and then a Hosey mark after he brilliantly took a fine pass from Shane Murphy put Emo back into the lead only for things to be level again at the break, 0-6 apiece, thanks to Jamie Sheehan.

Graigue got the first three points of the second half – from Conor Kelly, Trevor Collins and a Danny Bolger free – but Emo kept on plugging away.

Darren Strong got one and Nigel Murphy got another after he saw a goal chance go astray but a long-range Danny Bolger free had Graigue 0-10 to 0-8 up at the second water break.

Hennessy’s third point put three in it – but Emo came back again. Paul Lawlor (free) and Shane Murphy brought it back to one and in the 53rd minute, Danny Bolger lost possession out the field and Emo worked it up well before Paddy Hosey finished brilliantly to the net past the retreating Mark Timmons.

Conor Kelly responded for Graigue with a point but Padraig Kirwan and Paddy Hosey got late points and Emo celebrated joyously at the final whistle.