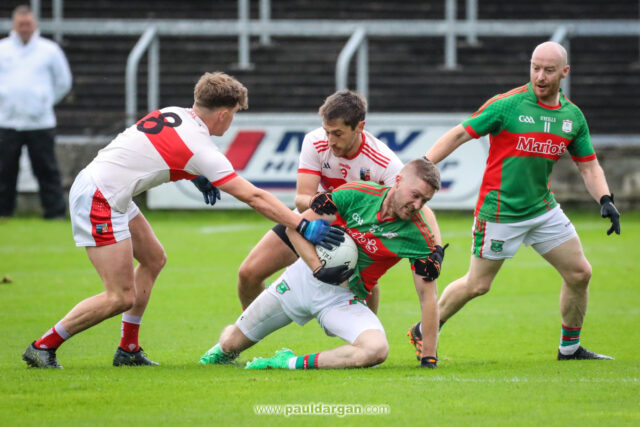 The last remaining Laois SFC semi-final place is up for grabs this evening in O’Moore Park when Emo and Graiguecullen meet for the second time in just over two months in championship football.

It has been a desperately sad couple of days for the Emo club following the sad death of Conor Montague, a young man who had played with many of their current players at underage level and whose brother Eoin is part of the senior panel.

The game was originally due to take place on Saturday evening but was postponed as a mark of respect and a minute’s silence will be observed this evening before the match gets underway.

When the sides met back in August in the 2020 semi-final, Graiguecullen were 2-12 to 3-5 winners with a very impressive performance. What has changed since that Emo might close the gap?

They were beaten by ten points by O’Dempsey’s in the opening round of this year’s championship and have since just scraped past The Heath and Rosenallis.

Graiguecullen, while soundly beaten by Portarlington in the 2020 final, have recovered well and have reached this stage of the championship with little fuss thanks to comfortable wins over The Heath and Stradbally.

Paul Lawlor will be back from suspension for Emo but Finbarr Crowley hasn’t played a minute in this championship this year but they still pose a decent goal threat as evidenced by the three goals they got against Rosenallis and two against The Heath.

They also got three in the Division 1B league final win over Arles-Killeen, the semi-final against Killeshin and that 2020 championship semi-final loss to Graigue.

Paddy Hosey and Jack Owens can take their chances while the Murphys and Sean Greene provide a running threat alongside the in form Padraig Kirwan.

Graigue, though, will be aware of that danger and have the defensive tools to deal with it.

Mark Timmons, Danny O’Reilly and Trevor Collins all have inter-county experience and Luke Hand and Conor Kelly are new options in attack.

Graigue are hot favourites and their consistency ensures that they rarely slip up against those ranked below them.

They should be strong enough to book a semi-final place for the fourth time in five years.